The Bullpen Gospels - A Book Review in Many, Many Parts 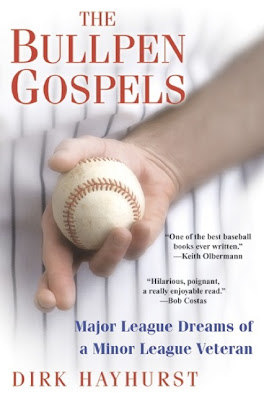 Editor's Note: This is the first in a series of posts, in which we meander our way through a review of Jays reliever Dirk Hayhurst's narrative non-fiction tome, The Bullpen Gospels. We're going to review the book bit by bit, and piece by piece, because we're just not the sort of cat who can sum up our thoughts neatly in 600 words. And because we'd like to stretch this out to continue pimping Mr. Hayhurst's book between now and the time that it is released on March 30. (So much for critical detachment, right?) By the way, you can pre-order this puppy at Amazon.ca, or whichever Amazon store is most geographically correct for you.

It's hard to resist the temptation to turn this review into a series of blurb-o-matic statements, meant to sum up the book in a glib and snappy manner. We've probably written about a dozen one-liners meant to make their way onto the dust jacket (which, we realize, has already been printed, and already features zippy blurbs from Keith Olbermann, Bob Costas, Rob Neyer and Cy Young's ghost. So much for that.)

We want to say things that sound really cool, like: "The Bullpen Gospels is a work of remarkable honesty and insight." (Because it totally is.)

Or we want to say: "Dirk Hayhurst demonstrates a self-awareness rarely encountered in professional athletes. The Bullpen Gospels is a funny, frank and revelatory look into the uncertain life of a young player on the cusp of losing the last remnants of his prospect status." (And the book is certainly all of that.)

We might even be tempted to offer up a notable quote, like: "The Bullpen Gospels goes places that you simply don't expect from an baseball bio. It offers up painful and unvarnished looks into the psyche of a young athlete which vividly portray the fragility of a pitcher's confidence, and the hard road traveled to develop the poise necessary to succeed in the game."

(We also really wanted to work the word "perspicacious" into the review, both because it is a really fun word, and because it truly sums up Dirk Hayhurst as an author. And given that this is part one of a multi-part series, there's still time.)

But, if we're dropping the sheen of quotatiousness and being really real with you, we'd say this: Beyond being a really great baseball book, The Bullpen Gospels is a book that speaks as eloquently as any that we've read on the gripping power of doubt, and the arduous process of transcendence. And on that level, it's far more than just a baseball book.
Posted by Tao of Stieb at 9:38 AM

I'll buy you a beer (though not at the Skydome) if you send me your copy.

You see, I'd have to send you my copy, and once you had it, how would I collect on my beer?

I would consider auctioning off a signed (by me) copy for charity, except that I know where I was when I was reading this book. And I worry whether if someone else's immune system would be able to handle my germs.

Tao, does that mean the book has been flagged?

i have been reading reviews of this book for 3 months and it still doesn't come out for another one!

The hype is out of control.

What a great resource!

It can't succeed in fact, that is what I think.