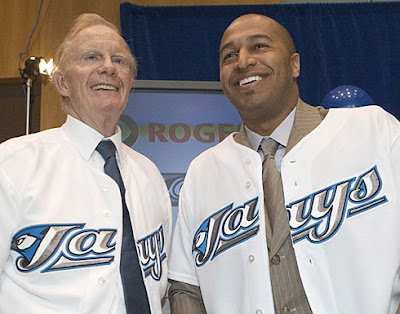 Ted Rogers was without equal in Canadian business, building a remarkable multimedia empire with an astute and entrepreneurial approach. He built a vast, varied and incomparably successful business by taking risks that others would not, and by working harder than anyone else would.

As the owner of the Toronto Blue Jays, Rogers rarely implicated himself publicly in the business of the baseball, calling himself a "village idiot" on baseball matters. And yet, under his stweardship, the team now has a vastly improved state of affairs, including ownership over its home park and all of the associated benefits that entails.

Ted Rogers was a leader in the truest sense of the word. He will be missed.
Posted by Tao of Stieb at 9:08 AM

The man was a baron of the business world, and for all the griping about the laissez-faire attitude towards baseball operations and middling payroll, the organization is undoubtedly in better shape now than before the Rogers era.

Wait, I guess I misread it the first time. I didn't see a joke in there

I agree, there's nothing bad to say about Ted Rogers.

Anonymous said...
This comment has been removed by a blog administrator.
December 3, 2008 at 4:51 PM

I just wish he loved baseball.

You have inspired this:
http://taoweblog.20six.de/taoweblog/art/20776716/skip-the-parade