The glacial pace of the offseason 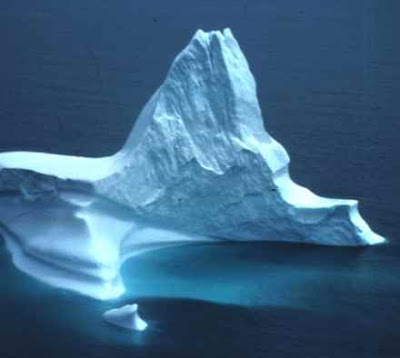 We have another full week before the Baseball Winter Meetings even get underway.

Now if you'll excuse us, we're pricing out a hyperbaric chamber for our apartment so that we can hibernate for the next few months in an oxygen rich environment while waiting for pitchers and catchers to report. Wish us luck.
Posted by Tao of Stieb at 2:52 PM

I just took a look at the news ticker on the side. The Blue Jays news on the day was that Kevin Mench signed in Japan. I hate winter baseball droughts.

I couldn't agree more, Tao, the news so far is ridiculously slow. The frequency with which I check the trade rumour sites has actually dropped below once a day. It used to be about three times/day.

Umm...that's an iceberg. Icebergs are bad 'cause they move a lot faster than glaciers.

Yes, yes, I know it was once part of a glacier, but if I didn't mention that you'd have to write back to tell me how dickish of me it was to point that out, which would just continue the cycle of dickishness. This way we can all be friends.

Yeah, but you know what a picture of a glacier looks like? It looks like a hill with a bunch of dirty ice on it.

Plus, we have it on good authority that this particular iceberg is only feet away from its original glacial beginnings.

How will Uncle Ted's passing affect the team?

Too soon to speculate.