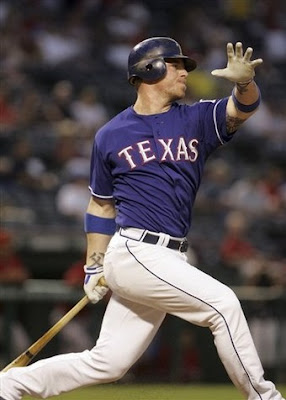 Editor's note: This is the first of a new series of posts, to be known as The Tao's Wandering Eye. The purpose of this series - which we'll probably abandon after one attempt, like we did with guitar lessons or yoga - is to highlight the players that we inexplicably have taken a shine to, and that may be available through trade or free agency in the coming off season. Our goal is to make an argument for their acquisition without sounding like an idiot sports talk radio caller, or worse, a sports talk radio HOST.

Also, we're aiming to find something to talk about other than the playoffs, which have started to depress us.

There's probably no better place to start our make-believe off-season shopping then with Hank Blalock, if only because the case for the Jays acquiring him so marginal that we're sure to irrevocably damage whatever reputation we might have left in these parts.

And yet, if you're looking for a possible low-risk, high reward acquisition to help keep the Jays in the game in the depressingly competitive AL East, Blalock as a corner infielder and DH may just be the ticket.

It's been a while since Blalock was a real up-and-comer, with the memories of his two All-Star Game appearances in 2003 and 2004 fading. In his best season, Blalock swatted 32 homers and drove in 110 RsBI runs in 2004, rating even some marginal MVP votes.

In 2005 and 2006, Blalock's offense declined, and while we would never make this connection, some remarked on the fact that this one-time weightlifting fiend suddenly saw his power numbers fall off the table. More eyebrows may be raised by the fact that over the last two years, our boy Hank has missed about two-thirds of the Rangers' games due to one ailment or another. Blalock has not yet turned 28, and one wonders why he is physically breaking down at such an early age.

And yet...when the boy is healthy and when he plays, Hank Blalock has put up some fine numbers over the past two seasons. Those numbers which stand out all the more when compared against Toronto's options on either corner of the infield going into next season.

In the last month of 2008, Blalock was absolutely on fire, with 10 doubles, 8 homers, 23 RsBI and an OPS of 1.080. Blalock also spent that time at across the diamond at first base, where he made just a single error. SI.com's Jon Heyman reported last week that one scout called Blalock the "best hitter I saw in the second half."

It looks at present as though the Rangers will pick up Blalock's fairly reasonable $6.2 million option for next year, although the right bullpen arm (or arms) may shake him loose.

We get that everybody loves Rolen and Overbay...it's just that when we think about the chances of either of them hitting 25 homers or driving in 90, we figure that it is a lot less likely than Blalock's chances of doing the same.
Posted by Tao of Stieb at 9:55 AM

This should be an interesting series. Hopefully more successful than my "Things I'll remember about the 2008 Season" series, though I haven't given up on it. I shouldn't have started with Mencherson, how do I top that?

I'm neither here nor there on Blalock. I'm still clinging to the hope that Rolen will master his new "keep the hands lower" swing over the offseason, and come back with a .300-20-85-Gold Glove campaign next season. You heard me - I'm clinging to it.

Tao, you're so careful to be grammatically correct with your s in RBI. Let's read this portion of the sentence all spelled out: "drove in 110 Runs Batted In"

Yep, you nailed it.

Ok Joanna, fine...how about this:

There. Not a shitty player in that bunch.

Darren: I have fixed the sentence. And you ARE a prick.

Anyways, I love these hotstove entries. I hope you do more. I can't wait for the WS to be over so the craziness can begin.

Seriously, you traded a draft pick in MLB2k6? I'm just going to assume that was sarcasm.

just get manny for fewer than six years...and you don't need anyone else, except for re-upping AJ. There, done and done. stop making it complicated.

It wasn't sarcasm. It was a rather weak and wounded attempt at wit.

Manny's not coming to T.O., and I think we learned our lesson about aging DH types. Plus, he's flaky... though he could shake up what seems like a complacent locker room.

Blalock's a neat idea, though. We need another lefty bat in the lineup, and someone to keep Snider in AAA to marinate a little more. Don't think Texas deals him, though.

AJ needs to be perpetually in a contract year, though I don't know if we get a comparable replacement at the money. I hope the Yankees give him huge money for 5 or 6 years, then he's a mortal lock for 10-10 with a 4.00+ ERA.