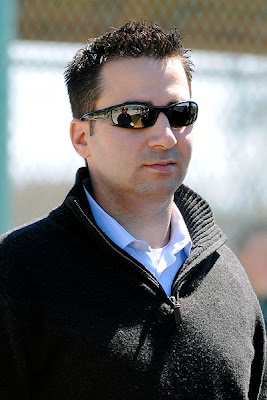 That word keeps coming to mind lately when we think of Alex Anthopoulos: "Inscrutable". The more that we think that we have started to figure out the Jays GM, the more that we realize that we truly don't understand him at all.

There's something vaguely infuriating about trying to pin down AA, in part because we feel as though he's offered up a sufficient evidence as to his thought process and mindset. When the man speaks in interviews, he speaks in long sentences, with multiple tangents, all fully contextualized. And while some speak multitudes to obscure their true intentions, we still get the sense that Anthopoulos wants to be as open with the media and the public as possible without putting himself at a competitive disadvantage.

But even with all of that context, we find it hard to use any sort of shorthand to assess what sort of moves might be on the Jays agenda for the rest of this week, through the rest of the season and into next year. On the surface of it, the notion that the Jays may be scouting Heath Bell or Ubaldo Jimenez seems odd, as our instinct is to think of the team as "sellers". And yet, when we look at the signings and trades that the team has executed over the past two seasons, it's hard for us to say: "That's not the sort of deal that this team would make."

To torture an analogy, AA doesn't leave a trail of breadcrumbs. He leaves a massive pile of them, and you're left staring at them thinking: "Well this is just no help at all."

(Both the Miguel Olivo and Anthony Gose trades keep coming to mind as we parse through all of the trade rumours, as neither was anticipated beforehand and neither fit into any sort of mould as a "type" of deal.)

The upside of this is that the Jays don't seem to be locked into a philosophy that would preclude them from doing anything at this point. (Okay: They won't trade for Carlos Beltran. We can pretty much guarantee that.) We don't see the sense of trading prospects for a veteran at this point in the season, but by the same token, it wouldn't surprise us to see the Jays take a stab at someone who a team was looking to unload.

We often get asked to put on our Carnac soothsayer hat and predict what the Jays are going to do with trades and acquisitions, and we can honestly say that we really don't have any idea what they're going to do between now and either of the trade deadlines. We're basically just closing our eyes and expecting the unexpected.

The man does see a bit of a mystery. Not too much unlike the GM in Tampa. Both seem really good at what they do and both seem to do the totally unexpected.

It will be fun to see what happens.

I'm in total agreement with your last sentence - I realize Moneyball paints a lot of people in ways that maybe they shouldn't be, but one thing that stuck in my head was Beane's sense that he "knew" how to deal with other GMs.
I am certain that being predictable is not effective in this (or probably any) line of business. And it is more entertaining this way too.