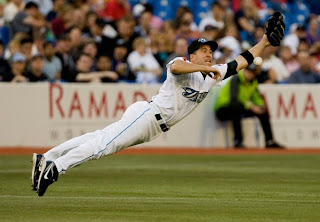 Frankly, I'm not sure it speaks more to the cult-like reverence John McDonald holds amongst Blue Jay fans or to the respect he's earned within the organization's front office that Johnny Mac heads into camp with nary a peep concerning his undisputed hold on a roster spot.

And again, quite frankly, I'm good with that.

I've always been a bit of a closet Mac fan myself. Never been able to bring myself into really questioning why a career .604 OPS baseball player has been a constant part on a team rife with turnover over the course of the last six seasons, and haven't been able to heap the usual scorn reserved for those who would blindly defend his presence.

Love him or hate him - and how could you, really - he's played the cliched role of human highlight reel on a team that's seen more downs than ups during the course of his time as a Blue Jay. And given the circumstances of the club, isn't that exactly what you'd like to see from a reserve middle infielder?

Of course, there have been the "bads" to go with the "goods". Those would be the times when Mac has been miscast as an everyday player. Be it by necessity or poor judgement. And let's not forget the times when McDonald, whose value lies entirely in his ability to play the shit out of shortstop and a little second base...... was drawing at-bats as a left-fielder.

But let's not dwell on those "bads". Let's not punish McDonald for the poor decisions of others. Let's celebrate McDonald, very likely (you'd think?) in his last big-league season, for what he does do and has done: defensive wizardry, a seemingly calming presence and all around good dude. Should some of those qualities ever be taken into account when evaluating baseball players? No, of course not. But we (I?) do anyway.

Hey, we don't punish Yunel for being flashy, do we? This ain't Atlanta.

So here's to you, Johnny Mac, and one more year of highlights. Looking forward to it.
Posted by The Ack at 12:04 AM

Is J-Mac the longest current-serving Blue Jay, now that Wells is gone?

I agree Ack. Sometimes, especially when you're talking about a bench player getting limited ABs, it's OK to just like a guy because by all accounts he's a great person, and you just know he's going to take your breath away with a jaw-dropping defensive gem every game or two.

Amen. And let's hope that once McDonald does call his career quits, he joins the Jays system in a managerial role, working his way up like Sal Fasano. That's where his biggest value will come to the team.

Thanks for this paean to Johnny Mac. I'm not so sure this will be his final season. For one thing, he's probably a better option for Milwaukee than their current starter (faint praise though that may be); there could well be a team that would appreciate a strong defensive backup infielder next year. McDonald has generally hit better in the past few years than earlier in his career - another solid (for him) year at the plate may get him a contract next year.

Remember when people complained about his contract? lol

Yep He's kicked around the majors for 12 years with last year's 1.1 WAR a good chunk of his lifetime 2.5 . It seems utility fielders and catchers (e.g Pat Borders 1.9 WAR in 17 seasons) have some value

I've wondered whether McDonald could do anything with the bat at college. Anyone know? I'm guessing not as he was a 12th rounder.

Why do you think this is his last big-league season?

The guy fucking rules. He can play for this team as long as he likes, as far as I'm concerned.

Then why put up a picture of him dropping a ball?

Chad: This is the last of year of his contract and he will have reached 10 years of service by the end of it. This ensures he gets a nice MLBPA pension. So, given this plus his age and poor to fair career hitting, the speculation is that he would start the transition to coaching (hopefully with the Jays). That said, I don't disagree with Gabriel that he might get another year or two somewhere. After all, playing pays a lot better than MiLB coaching! I'm guessing McCoy or Diaz are potential replacements as Defensive Wizard super-sub.

Thanks so much for the post, very helpful info.

The information you have to say this is very helpful at all, a lot of new things that I just know after reading your article. ( Obat Herbal Menorrhagia )
thank you very much been willing to share this information with us. Cara Menjaga Kesehatan Mata