It's just about that time 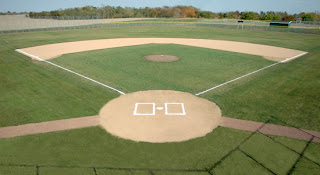 With pitchers and catchers not ready to report for another few, it feels like this post is weeks early. But given the alternatives - I just don't have another "who makes up the bullpen" or "is there another move on the horizon" post in me - maybe now is the right time.

I miss the game.

There's something about baseball that keeps me completely engrossed for the 8 months of preseason through playoffs and leaves me itching for more during 4 months of offseason.

Normally, this is the point where I'd joke with you all about what a sad existence I must be leading that a 30-something year old dude is pining for the return of a game. A game. But the truth of the matter is, I lead a charmed life with no complaints a reasonable person could defend. So why is it that in both times of stress and those of relaxation, I find myself thinking about the upcoming season and the myriad of possibilities that could unfold?

It's certainly nothing I'd claim to be proud of, but it's not exactly, um....uncommon, let's say, that I may miss a question posed to me by the better half because I'm lost in thought about how Aaron Hill's statline might look by season's end.

Do I think he should have given her a rose? How in the fuck should I know, I'm trying to figure out if Rajai Davis' projected (in my mind) 53 stolen bases will be enough to compensate for his below-average OBP in the leadoff spot. Am I right?

And there's just something about this franchise today - the way decisions are being made, how one transaction can seemingly never be viewed on a standalone basis, or graded in the immediate aftermath - that screams the word "inspired". For me, anyway.

The hiring of John Farrell to run the on-field product was an inspired move. We (using the royal "we" here.....ie: me) all cried foul when names like Don Baylor or Bobby Valentine were run through the mill as potential candidates. Not prepared for the same old, same old, how could those guys even be considered? Well, speaking plainly, they probably never were.

Trading presumptive opening-day starter Shaun Marcum for Brett Lawrie was inspired. Some will tell you inspired by cost savings, still others will say it was a blatant effort to lose. But I'll argue it was inspired by a desire to win it all - eventually - versus a record 5 games better in 2011.

Trading Vernon Wells' contract was inspired.... by common sense. With an assist from west-coast lunacy.

And here we are. Two weeks away from the start of one of the most intriguing seasons in recent memory. Maybe since '93.

Email ThisBlogThis!Share to TwitterShare to FacebookShare to Pinterest
Labels: is it opening day yet, Offseason

I can't wait for this season. Might be the most excited I've ever been for the jays. I moved back to Ontario from bc and I'm living in the gta for the first time so I wanna catch 20 games or so. AA is inspiring us jays fans to no end. This game isn't just a release from everyday life for some of us, but a true obsession that we need year in and year out.

And the storylines abound for the Jays this upcoming season. Will Snyder take the next step. Will Farrell help hudge the OBP in the right direction. Will Bautista be a force again. Will Lind and Hill bounce back. It's going to be very interesting and fun to watch.

And there's just something about this franchise today - the way decisions are being made, how one transaction can seemingly never be viewed on a standalone basis, or graded in the immediate aftermath - that screams the word "inspired".

one additional thing we have with this administration is a metric ton of talk to sift through. Riccardi never shied away from speaking his mind, but one always had the sense that he was motivated by his ego first, and spinning things for the organization second.

with Beeston and AA the Jays PR machine never stops. this is why it was hard to understand AA's quote about mandating playing time for John Buck. It seems to me to be the opposite of "inspired". I said on DJF that i don't believe AA, and that this is him trying to turn a Cito negative into an organizational positive. regardless if it was Cito or AA or Beeston, making late season playing time decisions based on assurances given the previous off-season seems to me to be a strategic mistake.

I want the team to make decisions based upon what's best for the team and its future. Letting departing veterans split time with young players is the right decision, and i hope they don't insist on trotting E5, Molina and Dotel out there this September out of loyalty.

I'd like to see more discussion from the Jays about potential platoons or at least partial platoons. For example, against lefties, Davis' OBP is actually quite good. Put Corey Patterson out there against top righties and we would have a projected top leadoff hitter. Same with Lind vs. lefties. I'd use tough lefties as an opportunity to get Johnny Mac into the lineup at 2nd or 3rd and DH Bautista or Hill. I remember the early 80's platoon of Iorg/Mullineks and Collins/Barfield which worked quite well until we got allstar production from those slots from one player. I hope Farrell is going to put the best players in the best situations rather than play to the egos demanding to play "every day".

Normally, this is the point where I'd joke with you all about what a sad existence I must be leading that a 30-something year old dude is pining for the return of a game. A game.

Ack, I'm with you here. Like yourself, I'm a one-sport man, so there isn't the benefit of being occupied in the off-season by another sport. It's baseball or nothing.

I'm not Jewish, but Pitchers & Catchers reporting is like the first night of Hanukkah. Let's get ready for eight crazy nights!

Does everyone is the blue jays blogger community hate Parkes? Just read something at 1 bj way, he's not a fan.

I met Parkes as he was passing through town here a moon or two ago, we had lunch and a pint(s) and great conversation. Good dude in my books.

I'm a lifelong casual fan, recently turned dedicated daily follower of the Blue Jays. This is the first time I've had to endure the long offseason, and can't believe how much I miss the game. I'm getting more and more excited for this season the closer it gets.

Ack, you're certainly not the only one. Cannot wait until spring training starts. Just wish that I was down there.

Mike, I believe the John Buck playing time decision was about the future. As AA put it, he wanted to keep his word so that future free agents would know that this organization would be true to their words. This straight shooting atmosphere could very well be the deciding factor in the future in landing a very desirable free agent. Yes, we lost out on a month to see what JPA had but it was just a month in a season where we weren't going to make the playoffs. John Buck was a player that had never had the chance to be the #1 guy and had a need to prove it. The reasoning makes sense to me and I can't see AA making a similar promise when we're in a position to contend.

And who knows, come September E5, Dotel and Molina may very well show that the faith in them have been well placed. It happened with Bautista. AA thinks E5 is about to break out. So why not hope for the best?

I think that was me at 1 Blue Jays Way who is "not a fan" of Dustin Parkes.

Maybe he's alright in person. Since I have never met him, I can't say. However, I absolutely detest his online personality. Mainly because before they had the internet to hide behind, mouthy punks like him eventually smartened up after taking a couple of beatings.

Back on topic, I whole-heartedly agree with you, Ack. I used to follow three sports pretty religiously, but since work became such a time- and energy-consuming part of my life, I find the only sport I REALLY ever cared about was baseball. To me, there are only two seasons: baseball, and waiting for baseball.

I don't miss the game as much as most here, but I do love it. Baseball for me is a wonderful "background noise". i.e. the season is so long, with ebbs and flows but it's always there for 8 months. When I "take back the couch/tv" from my kids on a Sunday afternoon to watch the Jays I can watch 3 innings, sleep for 3 and awake to watch the last 3. Absolute gold for a tired dad! I love baseball on the radio, regardless of who is playing. The cadence/tempo of the game and the announcers (Scully!) is the best there is in sports. Can't wait for it to all begin again.

Parker, are you sure you're not talking about Stoeten? He is the prototypical internet tough guy.

But at least he invites his readers to a pub where, theoretically, they could pound the piss out of him, so maybe he's not so bad either.

I guess I didn't spend enough time reading their blog to make any real distinction between the two.

Which pub? Maybe I'll pay a visit next time I'm in town.

To me, there are only two seasons: baseball, and waiting for baseball.

Parker, I think we just found our new version of Roger Hornsby's "waiting for spring" quote.

Only a few more weeks. There's only so many more hockey highlights this man can take....

Missing the Game? I know where you are coming from, but get used to it. Once you are hooked that is it for you.
Jeez, I just turned 60, I can still remember the pure electricity of that first game in 77, againt the Pale Hose.
I've always been a Leaf fan, way longer than the Jays. But, there was something about that franchise coming from the absolute bottom, Gillick building a team by developing their own talent, then brilliant trades to add on.
They dominated baseball for a decade when they arrived. For me, the reason I admire AA and the job he does, I can see what is happening now being just like what started in 1983. These guys are young and talented and just learning how to win.
We are in for a treat, believe me.

Well, I do not really imagine this is likely to work.