See, now this is fun 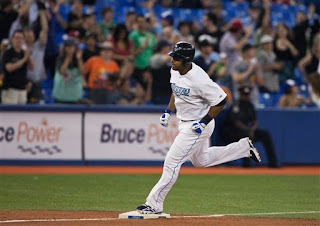 If it's been said once, it's been said, uh....more than once: in the blogging game, if you aint first, you're last. I've no choice, then, but to scrap my previously planned post discussing the Jays upcoming run of games through the AL East. It wasn't coming together 'fer shit, anyway, so consider yourself spared. No, really.

(....but just for the record, I do believe the Jays performance against the Rays/Yanks means something.....but it's not playoffs! or basement! Let's not regurgitate the fortunes of the 2009 Jays during a similar stretch - this isn't the same team. There - the essence of a post in one poorly constructed paragraph. Done and done.)

Instead, let's revel in what the club has brought and continues to bring as May turns to June: good, competitive, and fun! baseball - all under the carefree guise of Lowered Expectations. It really is the best, isn't it? I mean, we can revel in the glory of these mashing Blue Jays and their bevvy of overachieving (arguable) arms without resorting to the cynical douchebaggery (huh?) of the stereotypical Red Sox Nation (relax - not all of you - I'm sure there are a tolerable handful out there). We can enjoy the victories and not display the stomach turning sense of entitlement that you might (would) find in the Bronx.

Let's save the discussion on buyin' vs sellin' for another time. Like, you know, mid July. Let's worry about the progress of the Kyles and Bretts and Adeinys later in the season. Let's hope that's not relevant until September's expanded roster season rolls around.

For now, let's just focus on the fact that Jose Bautista continues to tear the goddamned cover off the ball. Let's talk about Vernon Wells' continued resurgence. Let's all remind ourselves that John Buck is outperforming his contract, as is Alex Gonzalez. Freddy Lewis - what a steal! And Shaun Marcum, who talked the leadership talk in the spring - stopper!

Email ThisBlogThis!Share to TwitterShare to FacebookShare to Pinterest
Labels: optimism

Amen. This season is all about watching the grass grow. It might be excruciating at times, but up until this point it's been one hell of a ride.

Roy Halladay is a jerk...

Not to mention a little Brandon Morrow action. Every 4th start he's going to be crazy good and frustrate the hell out of everyone else the rest. If ever everything clicks with that guy, watch out.