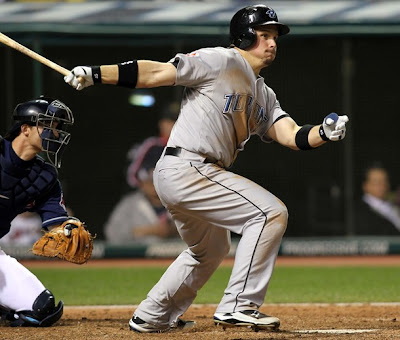 If you're only casually following the Jays this year, and you tune into a game and see Travis Snider's numbers pop up on the chyron, you might think that the Rosy-Cheeked Phenom was printing his back to the minor leagues.

And you, sir, would be a little weasel prat. Why you gotta be so negative? And what are you doing still paying attention to batting average? What are you - a Juan Pierre fan? Do you still use payphones? Are you going to send your witty repartee back to me via the teletype?

Sure, an extended slump, some desperate flailing at bad pitches and pulling his head off the ball resulted in Snider's average tumbling down to .125. But five good games in less than a week, and Young Travis has added 70 odd points to that number that we don't care about anyhow. Moreover, he's rocking a 1.450 OPS over the past five games, and we don't even give a flying fudgesicle how small a sample size that is.

Have you not seen the majestic opposite-field, extra-base hits our dreamboat has swatted about the yard last weekend and this week? Eight hits in his last five games, and seven of them are for extra bases. Five doubles! Two dingers! Awesome power! Good Job!

It's easy to get wrapped up in the day-to-day drama of the game in the same way that the chicks in the typing pool enjoy immersing themselves in their soap operas every day in the lunch room. So maybe we shouldn't get all fainty and sweaty over the hunky rakishness of our fresh faced matinee idol. But when we see Travis Snider looking poised and confident at the plate, we start to get weak in the knees, just pondering the possibilities.
Posted by Tao of Stieb at 12:19 PM

Agreed, Snidey is the "Amazing Sniderman." Here's hoping he keeps it up!

I think you should also reference the wicked quote by The Ack:
"Snider's HR tonight terrified me. Holy fuck. He belted the piss out of that ball."

People might remember that HR in the way that I remember the McGriff Yankee Stadium RF shot.

Agreed, Snider gives me a boner too.

Yea Scrappy that was a good one. But my favourite Snider homer is still the upper decker at Yankee Stadium from last year where he knocked straight down the hallway into the concourse area.

Those of us lucky enough to be watching his every at bat with strained attention - are going to be able to tell our great, great, great grandchildren (I've very bullish on health care breakthroughs) that we were there when Travis came off the snide and became "Sniderman - Defender of the Faith, Lord of the Rift" ( I also really liked Sean Connery in 'The Wind and the Lion' - don't ask.)

The red-faced kid is - before our eyes - becoming a monster.

Little-known fact about Snider. He, like Tim Tebow, is saving himself for marriage.

I enjoyed watching lunchbox Mash those two homers against the twins last year. Oh the sense of hope that was in the air back in those halcyon days...

Sorry to take us (somewhat) off-topic, but did anyone see the nugget on MLB.com that suggests Fred Lewis will sit when E5 comes off the DL.

Please, please tell me that even the Manager ain't that frickin' obtuse - is he? I mean, he has been watching the games recently? Does he have something against winning? No more rhetorical questions - I'm out.

E5 must stay glued to the bench.

@Mylegacy: Haven't seen any comments of yours around lately. Methinks, I get what your saying: Here comes a Sniderman. Without a doubt, the Sniderman will blossom this year! Here comes the Sniderman ... in the spring of Snidey. BTW, Snidey is not going to become a monster, insomuch as a superhereo. N'fuff said.

I'm really dating myself with this one, but my recommended name is, "Snidely Whiplash." The Whiplash is the pitcher's head and neck after a belted pitch is sent into the clouds.

I thought that awesome Snider dinger was in Minnesota last year. It went to the upper deck then straight down the hall. I dunno if it would have the same effect at a place like Yankee Stadium...

Anyways, I just remember because I was in an argument but after that HR I didn't care enough to do anything but gawk at Sniderman's mad skills. Now I'm single.

Its fun watching Sniders development with each and every at-bat. You can just tell that his swing seems better and a lot faster than it was last season. I sure hope he continues this against the Sox

i haven't "heard" a ball come off the bat like Sniderman since George Bell in BP when he was 19....am I dating myself?..When they hit it that hard never mind how fast it goes out of the yard, it SOUNDS different.