The Manager's not messin' around 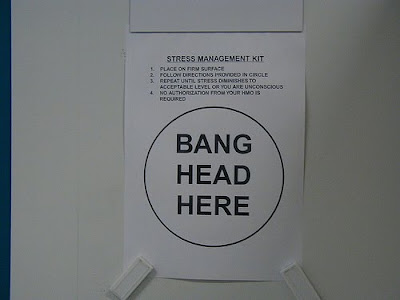 We've already said that we're going to stop investing what little patience we have left - what with the entirety of the lunacy that the world throws at us on a daily basis - on The Manager's goofy player personnel machinations. It's just not worth it. We can tough it out. We can soar above this. We can be strong and wait until The Manager shuffles off to his post-managerial career as a greeter at Gate 5 and know that someone is going to come in at some point and make some goddamed sense of this team.

But then you see this tweet from Bastian with the Jays' first lineup of the Spring, and you start looking for something against which you can bash the rational thoughts out of your frontal cortex.

We get that these are the Fake Games. That they are meaningless. That they don't count for shit. But when you look at that lineup, and you see Travis Snider hitting ninth behind John Buck, Jeremy (.669 OPS) Reed and Alex Gonzalez, it kinda makes you lose your faith in humanity.

Putting Snider in ninth, especially behind Reed and Gonzalez, is a clear and undeniable message from The Manager to Travis and to all other Jays players: Don't fuck with Clarence. You might complain about how he's doing things, or how negative he gets when he grunts out some incomprehensible rationalization. But don't take The Manager or his boys to task for the way they do business, or you'll find yourself at the ass end of things.
Posted by Tao of Stieb at 12:57 PM

Email ThisBlogThis!Share to TwitterShare to FacebookShare to Pinterest
Labels: Losing the clubhouse, The Manager, Travis Snider

This post goes well with the Jays story in my local paper this morning. "Snider Hoping to Crack Jays Lineup"
"Young outfielder will have to play his way onto team, says GM"

Really? OK. So he can learn more by going Babe Ruth on AAA pitching?

Does Rogers secretly want us to hate the Jays so they can sell the team without much fuss?

if Clarence is still doing this at the end of spring training then i'll worry about it. these games are meaningless and so is the batting order.

Check out the Garfoose's Twitter for Brad Mills' life story

Looking forward to the posts about the managers horrible bullpen management later today.

It's bullshit, but yeah, it's expected bullshit at least. Maybe Snider's better off this way - hitting in front of those three guys is a surefire way to make sure you NEVER get anything good to hit.

Cito did say he was going to give Snider playing time in RF thus Spring, so at leas he's coming around a little bit. I'm sure if Snider performs as well as we all know he can, he'll force his way out of the 9-hole pretty quickly.

Actually, that's probably what caught me off guard: I had actually somehow convinced myself that Snider was OBVIOUSLY going to get moved up in the lineup.

And frankly, him hitting 7th behind Reed would have seemed low but reasonable. But the nine hole really surprised me, especially given how The Manager had moved him up the lineup in September last year.

How do we convince management that the hard core fans they have left are really getting tired of this clown running the team?

Oh FUCK OFF. JB's infested the Tao too too now??

I guess I should un-bunch my panties until after spring training. It's not like the Orange-Pineapple-Grapefruit league means anything in the grand scheme of things.

I just wish they would bring in some benevolent Svengali to work with this rag-tag bunch instead of a manager who does best when his team is made up of all stars.

Fuck me. This is the time to get Snider up in the lineup, and make sure he's getting as many AB's as possible. Snider needs to face better pitching too, and the only way to do that is to have him at the top of the lineup.

Clarence will kill the season for us.

I don't care if he kills the season, I just don't want him to kill the future in the process.

I have read Tao for years, bucko. One of the best in the Blue Jays biz.

Tao, are you a Wii man only or do you have another game system? I was reading up on MLB 2K10 today. Looks decent. I might have to buy it. They say The Show for PS3 is the best but I don't have a PS3 and don't plan to for a few months -- although its ability to play Blu-Ray DVDs is enough to make it worthwhile purchase.

I got a PS3 this year, so I think I'm officially switching over to The Show.

I had fun with 2K on the Wii, and the ability to swing the controller to hit the ball was fun. But when I saw the previews for The Show, I nearly crapped my pants. I can't wait.

Plus, there are roster updates...2K's rosters suck.

Oh, please, JB can post here all he wants. This isn't the New England Journal of Medicine

Anyways, I just might have to throw a PS3 on the ol Future Shop Card. I'll get buy-in from my lawfully wedded by playing up the Blu-Ray angle.

Tao - while I share many of your concerns and nightmares about our beloved Cito - I am not having my sperm count retaken just because game 1 of the pre-season sees the sainted Travis Snider being started in the 9th hole.

This guy is just barely 22 - if he'd been a senior college signing he'd just be in Low A this year. No question; this guy, Wallace, Hill and Lind are going to be a powerhouse "Four" for years - BUT - lets let the "Kid" EARN it - lets not give it to him. He wants to hit 4th - no problem - just go out there and DO IT.

Now - if he's still batting 9th when he's 25 - now then I get my sperm retested 'cause obviously something will be all fu*ked up!

@Darren - PS3 is a great BluRay player. And that angle totally works on wives, although you might have to purchase some boxed set on BluRay that she loves to seal the deal.

@Mylegacy - Earn schmearn. I say throw the kid into the fire, and let him move up in the order. And you've got to imagine that he has earned the 7th spot in the lineup moreso than has Jeremy Reed.

I have posted here many times before. Just that Tao doesn't need to be called out as much as some of our other friends.

I feel it imperative to address my fans at this point. Clarence is just blowing his old horn for the world to see that he is in charge. But he really isn't - I am. I tell Alex what to tell Clarence, and that is the end of it.

I agreed that the manager would be left to his own devices for a few ST games, in order to present him with a face-saving exercise, that would bear no impairment to my long-term objectives of restoring this team to glory and bathing in my personal eminence (while making my company a commodious annuity, of course).

Travis Snider will not hit in the ninth spot for long. Randy Ruiz will play 1B vs LHP, and will see some time in the OF vs tough RHP and also get ABs at DH.

Have some faith in my brilliant strategy and sexy, savvy style. I am ridiculously smart, and a handsome tiger of a business man. My team will shock the world.

HTV is like a drug. I feel tremendous now.

It's true. I don't know who he is, but he scratches me where I itch.