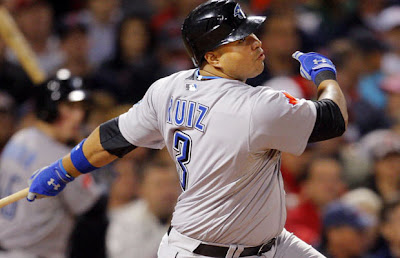 MLB.com's Noah Cozlov tweeted this morning that "GMs should be all over Randy Ruiz" given his play in Puerto Rico this winter. Moreover, he notes that Ruiz is playing first and left field (really?), and that he is in the "best shape of his life".

(Wow...you really can squeeze a lot into 140 characters!)

Quibble if you must about the quality of pitching that Ruiz has faced in Puerto Rico, just as some may have tried to do in attempting to pull at the threads and show his August-September to be nothing more than an illusion. (Although looking at the list of dudes who Ruiz took deep last year - Beckett, Wakefield, Pettitte, A.J., Joba - it doesn't seem as though he cheated us.) Maybe we're an apologist for some ghost of a chance that Ruiz will just keep on hitting, and become a cornerstone of the offense. But it seems to us as though he's done everything that he can to prove his worth to this team, and short of hitting a homer every game, we're not sure what it would take to keep him in the lineup or even on the 25-man roster.

(Of course, it doesn't help Ruiz that he'll need to keep himself in the seemingly impenetrable good graces of The Manager. We don't even want to start down the road of trying to understand what goes on in The Manager's head. The process is simply too maddening.)

Leading into the 2010 season, there is an abundance of choice for the Blue Jays when it comes to their 1B/DH/LF positions. It seems as though we're constantly reminding ourselves of possible options for those positions. "Oh yeah, what about Brian Dopirak?", or"Golly gee, I totally forgot that we still have Lyle Overbay", or "Why don't I care more about that Cooper kid?"

Or most importantly: "When do the Fake Spring Games start so that I can start poring over the boxscores to make fake arguments distinguishing one dude from the other?"
Posted by Tao of Stieb at 11:15 AM

Email ThisBlogThis!Share to TwitterShare to FacebookShare to Pinterest
Labels: Randy Ruiz, The Manager

It's absurd that Ruiz didn't start every day last year in September, and that the team seems unwilling to give him a shot - they have nothing to lose. He's our very own juicer, and maybe some of it will rub off on Vernon, whose at the point of negative WAR where he might as well risk PEDs.

What are we, a month out from pitchers and catchers reporting? I still think that AA has another move or two in him.

Maybe we'll get some arb death matches this year. Or blood feuds, at least.

I'd definitely call in sick to see that.

Where does he play?

If Overbay is still with the Jays, he plays 1B against righties, and Snider and Lind should split LF/DH so that leaves playing 1B against lefties.

He would be a nice bat of the bench, but we all know how the manager doesn't like to pinch hit for anyone.

Can you imagine Accardo's hearing?

He & his agent present their case, feel good about it, think they'll get their figure....then the room temperature drops 20 degrees and in walks The Manager.

I'm not sure having The Manager in a hearing room makes much sense. He'd just grunt and say "He doesn't deserve nuthin'", then cross his arms and look off into the distance until everyone was uncomfortable.

(Actually, maybe that would work!)

Is Ruiz still under contract with the Jays?

It still blows my mind that there is a distinct possibility Ruiz won't even break camp and make the 25-man roster. He has raked at all levels of play within the past few years, so you would like that he would be a shoe-in to make the team.

I'm sure The Manager would prefer otherwise ...

I wonder who he's got doing the peeing down there.

AA please get rid of overbay. What's the harm in playing Ruiz until Wallace is ready? He's cheap and can produce.

I believe the harm in playing Ruiz is his lack of defensive capabilities. Do the Jays really want a 1st baseman making a bunch of errors when they have such a young pitching staff, that will struggle as it is?

I believe the Jays are better off keeping Overbay for his defence this year than trying out Ruiz, Wallace, Lind, Dopriak, Snider, etc.

If the young pitchers have a 4 run lead to work with the first baseman could be a statue of Fred McGriff for all I care.

Yeah, fretting over defense at first base does seem to be a bit of a weak reason to exclude a guy who hits a homer every 10 at bats.

And if you are concerned about taking at bats away from Wallace, I'd advise you to look at the numbers Ruiz and Wallace put up in AAA last year and decide who looks like the better option.

@anon 2:15
Funny, that whole "best shape of his career" comment should have been a dead give away.

If the Jays make the Playoffs it also doesn't matter who there 1B is, what's your point?

His point was sarcastic, Peter. You two should share the same prison cell sometime. I would like to have CC video of that.

I'm proud to admit I've done a complete 180 on Ruiz. Wind him up and let him go.

Ruiz's's's'z distinct lack of major league playing time is shaping up to be one of many 2010 points of contention.

I fear he'll retire a folk hero to Jays fans.

Mr. Mike McCoy also continues to put up an above 400 obp while leading his league in steals in winterball.

Steals? Who talks about steals around here?!

(Having said that, go Mike McCoy.)

To be honest, I generally don't talk about steals...but it has been so long since that has actually been a legitimate factor at the the top of the lineup it sticks out a bit to me.

It's going to be legit again with Joey G-Right, homey!

Put him in coach!

Ruiz said on fan590 in november with wilner that he hopes to have lost 30-40 pounds by the time spring training has started.

Tweets have Toronto signing Delgado... I'm hoping for the sake of my younger man's memories that it stays a rumour.

And on that note, Accardo avoids arbitration and signs a one-year deal. We will never know what "off in the distance" look The Manager would have given him in the monumental screen split of the Blue Jays arbitration hearings televised in all its glory.