Corner boys don't get no respect 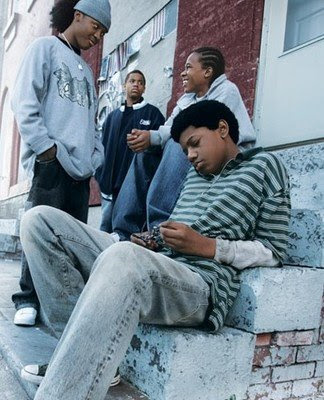 With all of the mid-winter rosterbation going down these days, there are lots of plans be floated by armchair GMs who have pretty much got their fingers on the pulse of what is going down with the Blue Jays. (Or so we think.) Most of these are looking ahead several years, as though we could just sim through the 2010 schedule and get right to the good stuff a year or two down the road.

But the fact is that there is still a 162-game slate ahead of this team next year, and you can't just flush it down the toilet and expect that the beleaguered fan base is going to put up with it. Tank Nation might sound like a clever idea, but this is a team that has lost a lot of currency, and has to be ready to put up a fight next year.

With that in mind, the odd thing that we keep noticing (or tripping ourselves up with) is the fact that barely anyone even acknowledges the existence of the two Major League veteran corner infielders that are currently under contract and on the roster.

Maybe it is a sign that, with the new regime and the new decade and the dawn of the Eternal Building Process, people are ready to cash in on Lyle Overbay and Edwin Encarnacion. They'd rather think forward, beyond 2010, towards the day when Brett Wallace will waddle around at first base and something (lord help us) will patrol the other side of the diamond.

But the odd thing about this is just how much we've all diminished the contributions (or potential contributions) of the two guys that's we've got. Overbay posted a WAR of 2.0 in 2009 and Encarnacion posted the same number in his last healthy season ('o8), which aren't league-leading numbers by any stretch, but they are at least positive contributions.

The Jays probably aren't the only team with a bunch of 1B/LF/DH types cluttering up their 40-man rosters, but we might be the only team to have disregarded the potential contributions of half of those players before pitchers and catchers report.
Posted by Tao of Stieb at 10:10 AM

I'd hold onto Encarnacion, but trade Overbay if possible. You can put Ruiz at first (which frees up the DH spot for Lind), and if he turns out to be a total bust, then bring up Dopirak or Wallace.

Ruiz started with a bang but fell off bigtime, I thought. I've got no problem at all with having Overbay on my team, until one of the young guys pushes him out anyway. I don't think that's going to be Ruiz, but I'd happily be proved wrong.

I'm really confused by the lack of faith in EE. Sure he's got throwing issues but even coming back from injury his numbers project out to 20+ homers, 80ish RBIs, .800ish OPS. And he's only 26. We also have the best infield coach in baseball. I think E5 maybe unfairly became a symbol of the hopelessness that set in when Ricciardi moved Rolen and started publicly shopping Doc. But he looks like a pretty good hitter to me, and if Butterfield says he can do it defensively with a little tweaking, then I'd be inclined to be optimistic.

I dunno, if Stewart pans out, J.P. might have done AA a favour with that trade.

I didn't think Ruiz dropped off. Didn't Cito just stop playing him? Instead he insisted on running Kevin Millar out there over and over and over.

I believe in Edwin Encarnacion.

Overbay's .905 OPS against righties is NAILS. His .534 OPS against lefties, not so much. $7 million for a platoon player is too rich for our cheap blood. It's why Overbay seems to be an afterthought, in my mind at least. I'd rather have Wallace up there learning the bigs.

But "learning the bigs" also means "eating up service time". I'd be as hesitant as possible before giving any of our young fellas an extended stay in the show.

Seriously. Y'all are way too prudent, worrying about what's going to happen in 2015 or some date beyond then.

Brett Wallace will be 300 lbs by the time he's a free agent. We've got to get everything we can from him now.

Yeah, Cito playing Millar made zero sense. But Ruiz was striking out A LOT. Great power when he makes contact, and a feel-good story but something makes me think 400+ major league ABs might leave him with ugly numbers.

Overbay's career numbers against lefties were pretty good until last 18 months or so. I hear you at 7 million, but will his next contract be for that much? Rather than dump an asset for money reasons when you're not really strapped for cash, why not extend him for a couple of years at EE money and trade him when need be (at a much more attractive salary)? If they'd sent Lind to Arizona to learn first base that might be a different story. Or if Wallace had done anything but play 3B so far.

1B defense is the most underrated thing in baseball, maybe because so many of them are awful. If we end up paying someone to take Overbay from us, as some have suggested might be necessary, then AA isn't as smart as he looks so far.

The Jays should go for Mike Lowell.

Noteworthy, that I didn't previously realize, is that after EE's contract expires this year, he still has another year of Arb left. He's under team control through 2011. And unless we can get Vitters from the Cubs, we don't have much promise at that position.

EE's still in his arb years? Wow, that's interesting. I definitely expect him to have a good year in 2010 but I figured it was pointless to hold onto him since I thought he'd be a FA after that anyways... given that he's under control for that extra year though, I'd love to see what he can do this season. Like you said, it's not like there are any other viable options at 3B in the near future.

Also, I'd be weary to bring Wallace up with Cito still at the helm this season. Service time aside, I'd hate to see him ride the pine versus left-handed pitching when he could be down in AAA perfecting his approach and getting some more reps at 1B. I know it's not a particularly difficult position, but he'll still probably need more seasoning there if he's going to grow into the above-average defender that AA projects him to be.

You're right about the danger of being tank nation. It's obvious the Jays will not be filling the stadium with hardcore fans who come out win or lose.

At least they have an unbalanced schedule so they can host the Yankee and Red Sox fans to help boost the bottom line.

Halladay didn't single-handedly sell tickets when he was on the team (attendance first dipped below 12,000 during one of his starts), but I'd imagine the Rogers Centre will be packed for their weekend series with the Phillies this year. Honestly, ticket sales from that series alone should more than make up for the handful of idiots who refuse to watch the team now that Roy's been traded.

"Brett Wallace will be 300 lbs by the time he's a free agent. We've got to get everything we can from him now."

It sounds like you're going to grab food away from him when he inevitably winds up at one of the casino buffets in Vegas.

Encarnacion is an exigent part of my sexy plan. He is entering his prime, going into his age 27 season. He will destroy opposing pitching for the foreseeable future, and I will convince him to sell himself low for a team-friendly extension, after Butterfield turns him into an above-average defender.

Overbay is in a contract year, and these idiots who think I will ship him out for little or no return have no indication or inkling as to the business prowess of the Pulchritudinous Tony Viner. I will platoon him with Dopirak/Ruiz, and possibly trade him at the deadline, or get a sandwich pick in the 2011 Draft at the least (after an extremely productive year from him).

I am extremely smart and handsome, and very experienced in guileful and basically disreputable business practices and negotiations. I will provide the conduction and aplomb that will allow for you to witness the monumental rise of the Blue Jays to Olympian heights.

PS: I have been busy applying my trade upon deliberations concerning a certain high-ceiling young foreigner, and if I can convince him of the economic and political advantages inherent in signing with me, the true days of glory may be even closer at hand.

Can't wait to see who Chapman signs with. I fully support the Jays investing 20-25m over four years for a potential phenom.

handsome tony is the life blood of this site. tony: why dont you post anywhere else? why tao of steib exclusivly? you would fit right in at drunk jay fans site.

I don't know how much month the Cardinals have left to sign Albert Pujols, you'd have to think the Cards wouldn't pay this much for Holliday if it meant they wouldn't have enough money for Pujols.