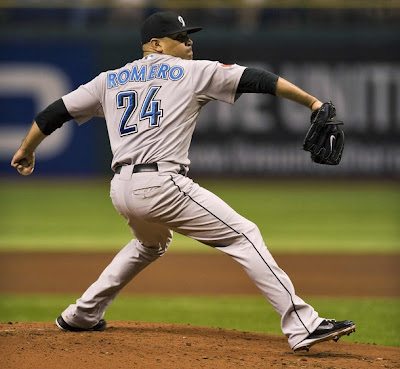 In lieu of actual thoughts and ideas, we offer up something somewhere in the neighbourhood. Be thankful. Gobble gobble.

Ricky Romero Will Hang In There
If there is one notion about the Jays that has continued to resonate with us in the time since the season concluded, it's just how much we're impressed with the way that Ricky Romero pitched down the stretch. Over his first two full seasons, Romero scuffled down the stretch as he wore down, posting ERAs over 5.00 in August and September of 2009 and over 4.00 in the same months of 2010. This season, he kept a tight 2.05 ERA in August and 3.32 in September to bring his season into dry dock with a 2.92 ERA for the full campaign.

(You can feel free to quibble now with your xFIPpery and what not. We don't particularly care. We're talking about the past, not projections. But have at it if it makes you happy.)

The numbers are one thing, but what we find impressive in retrospect is the manner in which Romero pulled those last two months together. It seemed as though he struggled with his stuff and with locating his off-speed pitched as he wore down through the seasons end...and yet he was still able to pitch (P-I-T-C-H!) himself out of bad counts and jams with guile and by pounding the zone.

It's one thing to be able to utilize an impressive arsenal to blow away hitters, but when this Jays team ends up playing October baseball, they'll need a pitcher at the front of their rotation who will be able to get outs when he's bagged and ground down from an endless season. Ricky Ro is going to be that sort of pitcher.

Sympathy for A-Rod
As we watched Alex Rodriguez leave the field to choruses of boos after a couple of high-leverage strikeouts, we felt more than a tinge of sympathy for the Yankees star. (Wait...Can we call him a "Yankees Star" if he's not a "True Yankee"? We forget how that works.)

Rodriguez is an easy punching bag because he has been so nakedly desirous of the mantle of the Most Important Player in Baseball. He seemingly works hard to be liked, in spite of the fact that he shouldn't care because, you know...he's a really good baseball player, and that should probably be enough for him and the braying hordes in the Bronx. Of course, his desire for stature is what led him to take the money that, ultimately, only the Yankees could pay, so maybe our sympathy should be tempered.

In that moment of pathos, there was a vaguely insane and overly sleep-deprived part of us that started to ponder what a change of scenery might mean to Rodriguez, and what he might look like in a Jays uniform as he closed in on Barry Bonds' all-time home run record. We realize it's a kooky notion, though we actually think A-Rod would find something resembling a warm-ish welcome in Toronto. Or at least something more than outright disdain.

Rodriguez would likely have to move from third base (supposing that the hot corner remains under the dominion of Brett Lawrie), though a move to first base and/or DH over the next six years wouldn't necessarily be the worst thing for his health. There's also a small matter of the six years and a whole lot of money ($128 million, give or take) that it would require to keep A-Rod fed and watered over that time, and the trade off of having the Yankees eat any of that would be giving up prime prospects to a divisional rival.

Maybe we just want to see Alex Rodriguez scamper into the sunset without the litany of brickbats tossed his way. One day, he'll be gone, and baseball fans will have spent so little time appreciating what a great ballplayer he truly was.

New Unis Here, New Unis There
As we wait with bated breath for the next iteration of the Jays' logo and uniforms to be unveiled, we noted with interest the confirmation of the new Miami Marlins logo this week. We hadn't paid much mind to the initial leaks of the logo last month, but now that it seems to be the real deal, count us in the minority who really likes it. Both the art deco font of the logo's "M" and the orange and blue exude Miami's own particular style, and we're looking forward to seeing how they can be executed through the full uniform itself.

An odd sidenote to this is that many of those who we've read mocking the unorthodox logo and it's lack of adherence to classic style are precisely the same people who hurl stats and lampoon those who are locked into an old perception of how the game should be played.

Why are new metrics good, but new looks bad?

Other Tired Memes
You know what is more annoying than the play-by-play and colour guys in the booth this postseason (and frankly, throughout the season)? Hearing bloggers and reading endless tweets about how terrible these guys are. Stop and relax. You don't need to agree with every word that comes out of their mouths over the span of four hours, nor do you need to pull apart every statement made therein. If you think you're smarter and better informed than the people broadcasting the games, so be it. But keep it to yourself, because it's tiresome to read all of the quibbles over every syllable that Ron Darling utters.

We're not saying that we always agree with what's said. But this is just another area where the hardcore baseball fans get whipped up into meaningless tizzies for the sake of their own aggrandizement. That's cute and all, but save your disdain for the dude next to you. He might be able to tune you out better than we.
Posted by Tao of Stieb at 9:28 AM

Some thoughts:
1. LOL the xFIP comment! Don't you know that Brandon Morrow was way better than Rickey Romero this season, no matter what your eyes tell you.
2. I agree, the Marlins logo is very appropriate for Miami
3. I was at the Leafs game last night so I got the opportunity to listen to the last three innings of the baseball game on the radio on my way home. Orel Hershiser and Dan Shulman were broadcasting the game and I have to say it again, Dan Schulman is unfrikking believable at how good he is at his job, he had me feeling like I was there at the game.

I'll confess that the last item is just me being grumpy at everyone. But I suppose I'd be happier to hear more praising of the good work being done as opposed to the constant bitching about the average output of most.

I'm so very grumpy this offseason. I have to say that this past season was much fun as a blogger. Even with some of the rather cool moments...

Was NOT much fun, I meant to say.

I will confess to having no room for sympathy in my cold, black heart with regards to A-Rod.

The Ack is mildly self-concussed from head-banging at the Three Days Grace concert at the Forks last night.

A broadcaster has to be really bad -- like "doom goes the dynamite" bad before I notice.

May I also add to the grumpiness by saying that I can no longer handle seeing the word "narrative" anymore? Every "think-I'm-so-cool-and-smart" baseball blogger has decided to run with "The Narrative" stories after a few thoughtful posts were used around the subject. Now it's just getting used to the point that I am going to puke through my eyesockets. We all get the point that the media shapes the narrative, now shut up already!

@ The Cheese... I guess if you aren't on the twitter, you'd have missed it from several weeks ago.

Still waiting on the obit and severance cheque (check, for our American friends) from Tao though. But mostly the cheque/check.

Spot on. Particularly the desparate/infantile need some bloggers have to shit on everything that comes their way. "You're smarter than these guys. Awesome." To paraphrase 90's powerhouse duo Sky "Just say [they're not] wonderful and then be on your way"

I'm waiting for the day that bloggers use their voice to empower the fanbase instead of drowning them in condescension and tearing everything about the game down.

Tao of Stieb, best blog on the block.

this is just to say arod is a mouldy plum in the icebox. such a douche-bag.

how about the 'i got it' episode? you think the same folks who boo hinske every time he shows up are going to embrace the fakest, purple-lipstickist, 3 run jack in the eighth when you are down by six-ist ... not me. boo! hiss! meh!! fuck alex and his ilk.

Tao must be sick of Zaunie already.

I, too, am sick of The Narrative of bitching about The Narrative. Hopefully your words are taken to heart by the worst offenders.

Also: Miami Marlins logo = YES. I professed my appreciation of it a while back on Twitter and was on the receiving end of much scorn. Glad I'm not alone on this.