The Conundrum Out in Left Field 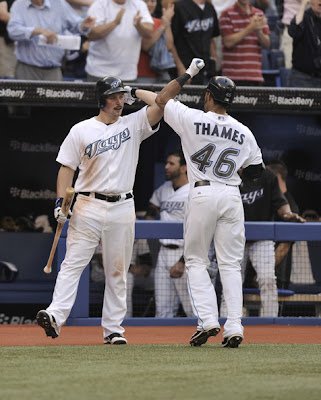 This followed a game which the Fisher Cats lost 10-9 in the ninth inning to start the series. (Did we mention that this was the League Championship that they're playing for? We'll probably mention this again.) We were left gobsmacked at the notion that the Jerry Jones of some third-level market could take it upon himself to scold the Jays' prospects as though they were his players. Gray assured us via Twitter that Solomon feeds the boys steaks and looks after them whilst in New Hampshire, but we can't get past the fact that he has no authority to lecture the Jays prospects.
If there were speeches that needed to be given, there's a manager in Sal Fasano who can do the talking.
If Solomon wants to tear a strip off the ushers, or tear into the marketing department, or yell at a popcorn vendor, then have at it. Those are his employees. The future Jays? He should probably keep away and enjoy the fact that these players who have embarrassed him so have managed to get four additional home gates for him. A little less scolding and a little more gratitude might be in order.
Posted by Tao of Stieb at 10:36 AM

I hope it's not options that determine who's starting in left field next year. 12th man in the bullpen, sure, but hopefully one of Snider or Thames steps up and grabs that job for good.

My guess, for what it's worth, one of snider/thames is traded. Loewen and davis are on the bench.

I wouldn't mind trading Thames and a good prospect or 2 for a SP.

I'm still kind of flabberghasted by the Jays' handling of Snider throughout his career. His constant up-and-down status (despite consistently killing the ball in AAA) is made even more confusing by the fact that Eric Thames has been given 339 PA's this year. That's more than Travis Snider has ever had in a single season in the majors, and that's confusing.

The bench next year is going to be interesting. With two spots reserved for the backup catcher and somebody who can play shortstop (i.e. either Johnny Mac or Mike McCoy), there are two spots left and plenty of guys who can't be sent down to the minors if they don't make the cut. At least one of Loewen, Davis, and Teahen will have to be traded or released by the beginning of the season, and other additions via trade and free agency will only complicate the situation. It's going to be a fun offseason.

Actually, an old-fashioned platoon wouldn't be a bad idea at all. You really don't see them used anymore.

That was my thinking exactly lzat night when I read and conversed with Kevin about Solomon and his comments. Hands off Bitch

If Snider could stay healthy and post a decent ops he would have had 330+ ABs every year.

I'm not sure that trading low on any of these guys fits AA's modus operandi; Adam Loewen or Thames might make some sense on the trade market; if there's interest in Encarnacion over the winter, I wouldn't be surprised to see him traded, which would open up a spot for Thames at DH.

One challenge with these young guys is that they are all left-handed, so there is no suitable platoon situation.

The Davis/Thames platoon would work well with a Lind/Encarnacion platoon, opening up DH for someone (one of Snider/Teahen/Loewen). Teahen has shown little enough in his limited PAs that they really ought to cut bait with so many younger clones kicking around, which, if they go with 11 pitchers, leaves Snider at DH and Loewen at fifth outfielder.

Unfortunately, they'll carry 12 pitchers...but of course, someone will get hurt, so it's probably not nearly the conundrum we think it will be.

Snider needs to be given 250 AB's to start the year and lose the job.

Freaky photo. Thames has a white arm and Snider has an African-American arm!

How do we get:
1- a bat to hit clean up and protect Bautista?
2- another starting pitcher

If we have those 2 items filled put the basketball throwing Labrador retriever in left field and we'll be just fine.

"The Reds aren't going to shop Joey Votto but they'll at least listen to trade inquiries this winter. Cincinnati could come back with Votto for one more year at $9.5MM and play Yonder Alonso in left field but Votto's salary rises to $17MM in 2013 and Alonso's best position is first base. Reds owner Bob Castellini won't want to trade Votto, just as he didn't want to deal veterans at the deadline. However, the Reds would be looking at much more value for Votto at two years away from free agency rather than one year away."

Is this blog still active or are you blogging hockey now?

Thanks so much for this post, pretty helpful data.

I’m really thankful for this list, it helped me save time searching for blogs that accepts guest post as I’m writing some inspirational article for my site and for the readers out there who wants to know about my topics. Obat Alami Asam Urat Cara Mengobati Stroke
Keep it up brother, I salute you for this share.
Obat Herbal untuk Menyembuhkan Hepatitis
Cara Alami Menghilangkan Batu Empedu