This Here's the Tale of Gordie Dougie Baseball Canada Stud 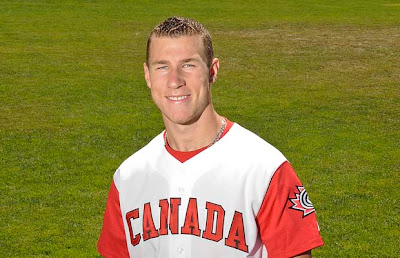 It's funny to think that is this day and age, legends can be built on little more than boxscores, unrestrained optimism, patriotic fervour and an overwhelming disdain for the status quo. But then, the fact that most of us have very little visual evidence to assess the progress of Brett Lawrie probably helps to add inches and feet to his legend.

It's been at once the most tiring and most tiresome meme of this year's Blue Jays season that the remedy for virtually any deficiency at the plate or in the field is the recall of the "hometown boy" (from 4300 KM away). Edwin Encarnacion bobbled a ball in the first game of the season, and people in our section (231, in case you're wondering if this was you) were calling for the immediate release of "E5" and the ascension of Gordie Dougie, the most scrappinest, Canadianest baseballer ever. Juan Rivera's woes? Release him for Gordie Dougie! Travis Snider's swing is effed up? Summon forth Gordie Dougie!

"I bet you he likes Don Cherry! Knows hockey! Orders double-doubles! Hates Quebec! Drinks strong beer! Says sorry a lot! Plays through injuries! Fights to defend the honour of his teammates! Has a pocketful of loonies at ALL TIMES! Plays euchre! And is really really polite!"

We're not entirely sure why it bugs us so much that there is a thick layer of sickly sweet maple syrupy exuberance for Lawrie. It could be that there is a certain provincial attitude around it that we find off-putting. We're reasonably certain, for instance, that were he from Venezuela, there wouldn't be the fans with marginal other interest in Jays prospects calling for his immediate recall every time Edwin Encarnacion tosses a ball up the line. (As evidence, we'd mention the ongoing discussions around Canadian Adam Loewen, or the popularity of the Jays' move to keep Scott Richmond on the 40-man roster.)

(And none of this is to say that there isn't a compelling reason for considering Lawrie's call up and getting excited about it, because he's hitting the snot out of the ball...albeit in the PCL, where the air is waifishly thin and where breaking balls don't break. Still, as he piles up stats, it's only been recently that he's closed the gap between strikeouts and walks, and we suspect that his willingness to get the bat off his shoulder will be greeted with great enthusiasm by opposing pitchers.)

We don't want to come off as anti-Canadian here, because we're just a pleased as punch to live in this country. But as a baseball fan, we're mostly agnostic to a player's provenance, if only because we've seen time and again how Canadian players get built into something their not when they arrive in Toronto, then slip away in the end, unwept. (Sorry, Corey Koskie.)

But here's the point of the post (and didn't it take us long enough to get here?): We're just about at the point where we're ready to concede that it might be time to give Gordie Dougie a shot.

Edwin Encarnacion has (as we've repeated a few times) regressed in almost every facet of his game this season. His defense is worse (which is hard to fathom), his power is non-existent, and in recent weeks, he's stopped even hitting the ball hard for outs. His plate discipline is in the tank, and he's hacking out of his cleats at just about everything with seams thrown near him. The 30 homer player that we imagined in the offseason? That's not who Edwin is anymore.

And while we're loathe to start the clock on him, it just strikes us at this point that Gordie Dougie could provide the Jays with more production and a decent glove at third over the final four months of the season. We'd peg him to post a .320ish OBP, .430ish SLG, about a dozen errors and maybe 10 homers over the remainder of the season.

Given the rather grim alternatives, we're not going to fight the Lawrie love too much longer.
Posted by Tao of Stieb at 2:03 PM

Believe me, I cant wait for Dougie myself however, one thing I have learned is to make a plan and then STICK WITH IT! We aren't going to win it all this year so why push to get Dougie into the fold until his defense improves and he loses his Super Two eligibility ( for the record, I could care less about that but its why he ain't been p yet regardless of the facts otherwise)..

So yeah..patience my young grasshopper...


The winning it all Jays have been designed around youth and the fact that NY and Boston are going to need to hit mini rebuilds in the next two years...

Look at some of the video on milb.com:

most of the HR's to RF and look at his speed coming out of the box - if anything he'd be a lot of fun to watch even if he's making an out.

I hear the kid is an unreal five-pin bowler.

Every year the Super Two date is around May 20th, so I would imagine it would be safe by now . . . why not dump EE tonight and bring up Lawrie for this little home stretch! I bet you'd sell some serious tickets this weekend. But, of course, AA will take the boring and lazy route and wait, wait, wait.

If he's not up by June 1st I will officially believe that Anthopoulos is asleep at the wheel.

Man, if this Buster Bars thing is bogus...

If EE had shown even a sliver of life, I'd disagree. I guess we don't have a lot to lose, but I'd still be inclined to leave Lawrie down there for a while.

To me, Brett Lawrie is more like a Wayne Dougie than a Gordie Dougie

Adam Loewen has less than a thousand at bats on his resume. Put in perspective he has less at bats than Wayne Dougie or Travis D'Arnaud. Given this his stats are pretty decent. He is not your typical mid to late twenties PCLer.

So good topic really i like any post talking about STD Symptoms but i want to say thing to u STD Disease not that only ... you can see in STD Illness Crabs STD symptoms and more , you shall search in Google and Wikipedia about that .... thanks a gain ,,,