Imaginary Battles - Yunel vs. Lunchbox for the Two-Hole 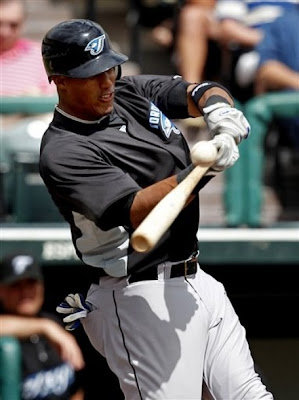 Somewhere along the line, we got it in our head that the two-hole hitter for the Jays (and in general) should be a left-handed hitter. Maybe we were half-joking initially about this, but it's become a bit of a truism lately.

It's probably a remnant of some of the old-timey axiomatic knowledge that we still carry around, but the notion of having a speedy leadoff hitter with a left-handed batter to hit behind him and take advantage of the hole between second and first has stuck with us. It could be because it still works in video games.

Also, the metrics around lineup construction go over our head, though we suspect that they are all bunk anyhow.1

Still, quick look back through all of the Jays' successful teams of the past, and you'll invariably find a lefty or a switch hitter hitting second. Rance, Tony, Robbie, Mookie Wilson...Every time the Jays have gotten good, there's been a lefty in that slot.2

As such, we've found ourselves only half-kiddingly proposing Travis Snider as the team's number two hitter for the coming season, rather than the more likely choice of Yunel Escobar.

The thought process, we have to admit, is a bit sketchy. Snider's a lefty (check!), and looks better to us handling the bat, as even Yunel's successful swings appear as though he's hurled himself off-balance into some positive happenstance. We have visions (in part based on a couple of the screaming hot singles we've had the chance to see Travis hit this Spring) of Snider cranking out hit after hit through the right side of the infield, with Rajai Davis scampering around the third on the play.

Of course, the only fly in the ointment is the fact of...well, the facts. For whatever it looks like to our untrained eyes, Yunel has posted a much higher contact rate (85.7 versus 72.8% for Snider), swings less often at pitches outside the zone (24.6% versus 32.9%). Snider is also more of a hacker than Escobar, going after 51.9% of pitches sent his way (versus 44.6% for Yunel.)

Mind you, Snider's numbers in almost all of those swing discipline numbers are showing progress, so we'd like to think that a full season of regular use would help to prove us right, even if we kinda look wrong right now.3

One final thought: Though these Fox Sports hit charts (Yunel at home, Snider at home) are somewhat less than optimal, what we notice are a lot of ground ball outs made to the right side of the infield by Snider. Were he to hit second and a runner in front of him pressing the defense, might there be an opportunity to turn more of those outs into hits?

1. Our suspicion over these sorts analyses emanates from the fact that many of the examples we've seen are tested in the lab - computer simulations - rather than in the field - er, the field of play - and there are a multitude of variables that we think the simulations miss. Which is why the simulations continually spit out results that make it appear as though you could reorder your lineup by drawing out of a hat each day and over the length of the season (And more cynically, we'd guess that there are some who run these analyses who aren't particularly interested in complicating the equation, lest it complicate the solution, which they've already stated is dead simple.)

On Cito Gaston's first day as manager on May 15th, he swapped Tony Fernandez and Gruber's spots in the order versus Cleveland starter (I swear I'm not making this up) John Farrell. He'd keep Fernandez in that spot until August, when the Jays would add the veteran Wilson, who hit second for most of the remainder of the season. Post-Jimy, the Jays put up 4.64 runs per game over the remainder of the season, and went 77-49, winning the AL East.

3. And if you know of an argument that says that contact rates are irrelevant markers of success in the two-hole, we'd be happy to hear it!
Posted by Tao of Stieb at 8:11 AM

You are missing a decimal point with one of Snider's swing rates, but it does seem as if he swings at 519% of pitches anyway, at least in a 3-1 count.

Fixed. And yes, maybe that was my subconscious taking over the typing on that one.

We knew which Mookie you were talking about, Tao.

Actually, I thought it was Mookie "don't call me Manny" Lee he was referring to.

Ha! I had left it at "Mookie", but that some of my younger readers might not know him as well.

You know, I remember being more excited about Lee Mazzilli coming over from the Mets than Mookie in '89.

And both were usurped by the return of Jimmy Acker to the fold.

We can reasonably anticipate Snider being one of the Jays top three hitters, and the 1,2 & 4 spots are the most valuable, so I'd love to see Snider batting in the 2-hole.

Great analysis. I could see (and be pleased with) Snider batting anywhere from 2-5 in the order. Anything to keep his confidence up. I am as suspicious about intangibles as anyone, but players are human, and think themselves into slumps worse than the stats can bear out. This was tangibly evident with Snider many times over the last two seasons.

I should amend my judgment- Snider makes lots of sense as the number 2 hitter against right-handed starters. Against lefties, Escobar would probably be the better option.

I'd like to see Snider get on base more consistantly before putting him in the 2 slot. As it stands Snider has a career .318 OBP vs. Escobars .364.

I do expect Snider to prove to be the better choice, but I haven't seen it yet.

Thankfulness to my father who told me on the topic of this web site, this
blog is really remarkable. Pengobatan Herbal untuk Menurunkan Asam Urat Tinggi
I’ve been surfing online more thаn 4 hours today, yet I never found any interesting article like yours. it is pretty worth enough for me. Beberapa Manfaat Jus Tomat untuk Kesehatan
In my view, if all web owners and bloggers made good content as you did, the net will be much more useful that ever before.
Beberapa Macam Jenis Penyakit Kanker Di Dunia ini Ginkgo Biloba Plus Capsule