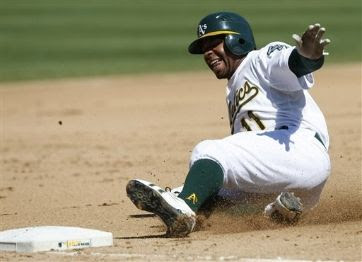 The Jays acquisition of Rajai Davis is one of the more confounding moves in Alex Anthopoulos' time as GM.

It's confounding not so much because we don't understand the "why" of the move, because the acquisition of Major League calibre outfield depth was likely to occur with the departures of DeWayne Wise and possibly Fred Lewis. Adding a guy who could be a very serviceable starter if the need arose makes sense.

But what we don't quite understand is what we now have in Davis. We know that he can pile up stolen bases. (And, as Drew pointed out to us last night over a tasty beverage at our Jays Tweeters Algonquin Round Table, he can use that speed to go first-to-third or score from second). But is he really a leadoff hitter? With a .320 OBP? And a walk rate of 4.6%?

If everything plays out right, we could definitely see Rajai as an everyday guy who slides into each of the outfield slots, and posting an OPS near .800 and getting driven in often by the heart of the order.

Mind you, much of this could be moot within the next few weeks if Anthopoulos continues to find serviceable stray ballplayers here or there, or one big deal. So ask us what we think of the move after a couple of weeks. We'll have it all figured out by then.

Going the other way
The Jays let Trystan Magnuson (Canadian!) and Danny Farquhar go in exchange, which doesn't seem like that much to give up. Both showed some promise at Double-A, but they are getting long in the tooth (25 and 23) to be considered prospects, and their progression doesn't suggest guys who are ascending to be valuable bullpen arms in the near term. Not that they are a couple of bums, but we don't see this really impacting on any team other than the Fisher Cats next year.
Posted by Tao of Stieb at 9:01 AM

Davis seems to have a lot of upside. I don't think he's been given a chance to grow. He could be better than he has seemed to be so far. Plus, he seems like a good guy.

I think Davis would make one of the better 4th outfielders in the AL if that's what his role ends up being, but if he does end up playing every day, I won't be as mad as many people.

One thing about guys like Davis, whose main asset is his base-stealing ability, is that their biggest skill doesn't show up anywhere in their slash line. If a guy hits a double, that extra base shows up in his slugging percentage; if a guy takes a walk, it shows up in his OBP. But Davis stole 50 bases last year, and his .697 OPS doesn't reflect that in any way.

Just for fun, look what happens when you add those 50 extra bases to his Total Bases from last year: his SLG goes from .377 to a much more impressive .472, raising his OPS to a respectable .792.

Obviously a single + SB isn't the same as a double because stolen bases can't drive guys in, but the other effects of speed - going first to third, or scoring on a hit most runners wouldn't - are other advantages to speed that offset that, I think. And if we're talking intangibles, how about the distraction that a SB-threat like Davis can cause opposing pitchers? Maybe they miss their spots a few more times than usual if they're worried about keeping an eye on him, and maybe a guy like Bautista gets a chance to take advantage of those mistakes.

The fact is, Davis is a very different type of player than most of the guys on this team, and that's a good thing. It's nice to have options, and whatever his role ends up being next year, he's an interesting addition to the club at the very least. It's going to be a fun Winter.

I was about to write something kinda lenghty and probably as equally misinformned until I read Parkes post and he pretty much said a lot of what I was thinking.

Also, is part of the "weird feeling" of this the fact this is the first real post-Citobot 2000 indication that the Jays are getting someone (1) who can steal bases and (2) will probably be actually ALLOWED to steal bases?

Just out of curiousity where would his OBP from last year rank amoungst Jays Players?

Any chance this is just loading up to make a move on either Upton or Rasmus?

I'll never forget this time last year, when the Jays blogoshpere was all upset that Bautista was going to be playing every day.

Ty's point regarding the "tangible" effect of stealing bases is a good one, so long as you also include the outs made when the base isn't successfully stolen (OBP and SLG will decline). You then need to compare this "stolen base adjusted" OPS with the same for other players to get a true sense of how much better or worse he is on that front.

QJays: Yes, but also don't forget to account for the outs he would have made had he not stolen (i.e., Davis singles, then steals second, then the batter hits what would have been a double-play ball).

Do you do that everytime a player gets a double? I don't recall what the extra weight is on that?

Also, don't forget that he can swipe a ton of bags in the late innings where he's pinch running for a much less fleet of foot, but higher OBP guy.

Nothin like swipin a base when you did nothing to get on.

Gawd, you cynical fucks. 50 SB is a significant stat. You could look it up. As is a high 80s percentage doing it. Great trade, even (or especially?) as an extra outfielder. And bunion-free as far as I can tell.

Everyone is focussed (two s's?) on Davis's 2010 stats, but in 2009 the guy hit .300 with a .360 OBP. Those are early Shannon Stewart numbers. I don't see any reason he can't get back to that level, particularly now that half his games won't be played in an awful hitter's park.

Thanks a lot for writing this, it was unbelieveably informative and told me a ton.