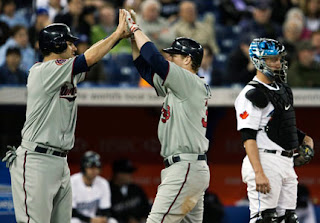 If you clicked your way on over looking for an early week pick-me-up, keep on clicking, friends. Unless you'd like to discuss the weekend? Can we still go there? SWEEP! Romero! Morrow! Bautista! Oh, right....I missed my chance at the warm & fuzzies. Well, shit.

Exaggerations aside, the Jays lost to a pretty good ballclub. That's going to happen, even to an obviously playoff-bound club like the Jays (heyo!). Here's what weighs heavy on my mind:

Travis Snider
You may recall my fanboy fantasy ramblings on The Future earlier this season. I took comfort in knowing I wasn't alone. His early season struggles caused me great pain, and suddenly, he was arriving. Too poetic? OK - he was tearing the cover off the goddamned ball. And now he's hurt - DL'd with a sprained wrist. That's never good.

Snider is a rare talent, and young enough that the injury is likely only a minor setback. He won't forget the lessons learned turning the corner in recent weeks. But still.....momentum is a wonderful thing, and just like that - wiped out. Let's hope the DL time is simply cautionary to eliminate any lingering pain, and Young Travis doesn't go all Lyle Overbay on us. Speaking of....

Lyle Overbay
Things just aren't turning around for ol' Lyle, and the opener against the Twins showed things may be going from bad to worse. Mere coincidence, maybe, but methinks his struggles at the plate are affecting the dude tremendously, as evidenced by his brutal night in the field. Oh, and in the post-game comments as well, via @MLBastian:

Asked if the boos were worse tonight than any other time this season, Overbay was at a loss: "I don't know. I don't care."

Not good. Lyle Overbay is this year's Vernon Wells, apparently.

But seriously, how much longer will the Manager allow this to continue? "Doing right" by his player is one thing (debate for another time....), but hanging him out to dry while the team suffers along with him is another entirely. You'll note that I've really avoided piling on Overbay during his season of misery (well, 2 months of misery), because (a) that's not really my thing, (b) Overbay has always seemed like a good dude not deserving of personal scorn (unlike Millar!), and (c) ....what's the alternative - until Wallace clears Super-2 status, anyway?

The Return of Tallet
Wait, this is a good thing, right? Well, it should be....unless he claims a rotation spot at the expense of development - ie: Brett Cecil, Brandon Morrow, or the also close to returning Marc Rzepczynski.

Yeah, I know. Dana Eveland seems the obvious choice to be the first bumped from the rotation...and that's what's so frightening. It makes too much sense. Eveland has given the Jays pretty much all they could have expected - a handful of starts replacing innings otherwise lost to injury, more or less giving the team a shot. Does that description remind you of anyone else? Maybe a certain veteran left handed swingman plugging holes for the Jays in '09? Yeah.

Please, Clarence. I implore you: bring Tallet back in the role in which he thrives - multiple inning reliever/spot starter. Is that too much to ask?

Ack - don't cry for Dana Argentina - the guy's stuff is perfect for AAA. As to Tallet - no way in a just universe he stands before Scrabble.

You know I have a soft spot for Tallet. I can't figure out why, maybe it was his attempts at uniform styling, maybe even his desire to be more than the sum of his parts. Maybe because I have some odd love of anything in a Jays uniform.

I look at last night for exactly what it was. A good, but not great, team from another division with potential HOF 2-3 position men taking advantage of an obviously shaken Dana Eveland. It's not the beginning of the end, or even the start of a slide. The Twins just came off of an extremely high comeback against one of the best closers in the game before they had to fly up to beat up on us.

No doubt, that if Marcum can show up tonight with his usual stuff it will take the wind out of the sails of the Twins and we will be back to our love affair with Snider, our derision of Overbay and our rekindled admiration of Wells.

On a good note, Bautista continued to provide the offense and defense that made him AL player of the week last week. http://mlb.mlb.com/news/article.jsp?ymd=20100517&content_id=10112284&vkey=news_mlb&fext=.jsp&c_id=mlb

my view on Overbay has been "if not now, when?"

the argument going in to ST was that he was still not right from his wrist surgery from 2 years ago and that there was a chance he would bounce back. if 2+ years is not long enough to get over an injury then maybe it's time to admit that it won;t get better. or, if not now, when?

the next argument was that you needed to play him to boost his trade value. i argued that this would have been best accomplished by platooning him with Ruiz, since any trading partner would be acquiring Overbay as a platoon player or bench player. in any case, at what point is it ok to admit that his trade value is not going up?

so the last iteration of "if not now when?" pertains to letting someone else take over 1B. Getting Wallace ML ABs in a non-contending year seems to me to be the sort of thing which should be an organizational priority. Finding out what you have in Dopirak fits the same description.

So, AA, how much longer do you let Çito put the team at a competitive disadvantage and retard development? Is there any point at which you force the issue?

Last night the Jays game was not on any channel that I have. I have Eastlink out here (which I've always assumed was a Rogers reseller) and I have the digital package. The game wasn't even on the MLB package. Unless I missed something, it just wasn't an option for people in my area (Nova Scotia).

I followed the results on my laptop while I made my MLB2K10 major league debut against Texas. : )

Anyways, my current obsession is with how good do the Jays have to be doing before they decide to rent a player or three. I want Lance Berkman!

As for Overbay, how would you answer the question? At least he was honest. The writing is on the wall as far as his future with the Jays. He could have gone with, "Both teams played hard, my man." Or he could have gone with, "The fans that boo can kiss my pimply, Brie-white ass." Or, "I get the cash either way, homey." In fact, I think he should break out some caustic rejoinders for the rest of the year. He's already got more bank than 98% of the planet.

The Lyle Overpaid era has to end. Sorry to pile on the guy, but come on. It's not like was are waiting for a guy with David Ortiz's hitting history to bounce back. We are talking about a guy who was pretty successful for a short window of time. Enough already.

Tallot shouldn't be anything other than a long reliever. Eveland has been than Tallot and is worth the investment of time to see if he can develop.

I'm probably the only one, but I am against bringing up Wallace at this point. Sure he could come up and do okay, however, I do think that spending more time in the minors would be good for him and the team.

I think the solution is to keep Overbay until Snider comes of the DL, then waive his ass. Then Toronto's new 1B should be Jose Bautista (with Snider in RF). Then hopefully come the trade deadline Bautista has 25 home runs and the Jays can deal him for an up and coming STUD!

At that point, Wallace can come up and take over the 1B spot.

It was painful watching the game yesterday and seeing Overbay come up to bat at least twice with 2 outs and runners on. You knew the strikeout was coming which made it all that much more devastating when it happened. Why is he still 5th? If Cito is still stuck on playing him every day why can't he bump him down the order? Put A-gone or Bautista in the 5 hole and maybe we could have strung some runs together.

Good point, and one I completely forgot to mention in the post - if Cito insists on sticking with Overbay - everyday, against lefties, in the middle of struggles, etc - would it not make sense to drop him down the order? Is he concerned about hurting his confidence? Uh, Cito....I think the .180 average has taken care of that already.

My long-winded point in all this is....Cito isn't doing anyone any favours in his treatment of Overbay - not the team and not Lyle.

I was at a game recently and had the opportunity to watch Overbay from up close.

The decline in bat speed is really crazy.

Peter D, you're not alone in the "leave Wallace in AAA" camp. We have the dogs to cover Overbay at first for the time being. I'd like to see Wallace get at least 350 AB's at Vegas before evaluating him.

Overbay will turn it around. Only one year ago he was our best hitter v. RHP. I do support some more playing time for EE or Ruiz at 1B in the mean time though. And I support the waiving of Overbay in August.

See what happens when you have a good, constructive conversation about a struggling player?

Tonight's post: Will we ever see Dustin McGowan pitch again?

Well, I am going to boo him for his shortcomings up to this point.

On an unrelated note, I wonder how Billy Buckner of AZ likes that name -- especially every time a grounder comes back over the mound.

Overbay raked today and got his average up to .190. Overbay is painful to watch in games like yesterday, when you know, no matter what the circumstances, Lyle is gonna get to the dish and suck is just gonna happen.

In the fantasy transaction list in my mind however, Eveland has been sent away, never to return. So long, Dana, we hardly knew ya! He has the appearance of one in career free fall.

I can't explain it, but my favorite player is Joey Bats. Watch him at the plate, he bends, twists and stretches more than Ichiro. It must not take much for him to tighten up! What a show!

At the beginning of the season, I saw the logic in playing Overbay every day in order to drive up his trade value, even if I didn't agree with it. That didn't work, obviously, and it seems to me that Lyle will get the Frank Thomas treatment, as opposed to the Rolen treatment, when Wallace is deemed ready (July, hopefully).

Overbay was, until this year, never as bad as the boo-birds made him out to be. I bear him no ill will - he stopped being part of the long term plan a while ago. That makes his struggles academic. Sure, he's not trade bait anymore, but other (expendable) guys are: Bautista, Gonzalez, Buck. You win some, you lose some.