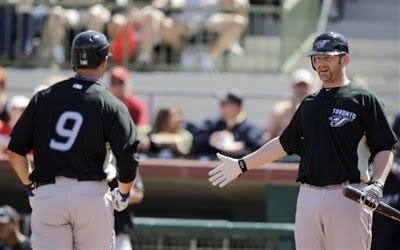 Considering how high and how low people have gone on J.P. Arencibia, it's hard to believe that it will only be three years this June since he was drafted into the Blue Jays organization. Catchers of the Future are always a tricky thing, and a great deal of them only emerge as legitimate Major Leaguers after abandoning the Tools of Ignorance and stepping out from behind the plate. (Like this guy.)

Still, there is some reason for optimism as Arencibia plays well through the Fake Game portion of the season. After hitting his third dinger of the Spring yesterday, we're wondering (almost certainly entirely prematurely) if Arencibia isn't playing his way into the conversation of which catcher joins the team when they head north.

Look, we know this is stupid. But this is the stupid, overly optimistic time of year. You wouldn't crap all over someone for being especially merry or jolly through the last weeks of December, would you? At that time of year, people see holly and winterberries and tinsel and lose their minds. We see Arencibia wearing number 9 (an especially auspicious number, if you ask us), and we start to have visions of his emergence as a stellar backstop. Or at least as an option.

We appreciate that one of the catch-and-throw guys will in all likelihood be the guy who gets the call at the end of this month. And we also realize that a couple of good at bats in March don't offset the step backwards that Arencibia took last year in Las Vegas. But we're hopeful that with a clean bill of health, Arencibia might emerge at some point this season as a viable backstop in the short term, and a middle of the order bat in the longer term.
Posted by Tao of Stieb at 11:07 AM

Let him mash in Vegas all year, come up in September, and be riding high when 2011 (the year of the Blue Jay) comes around.

When I referenced on twitter that I had a couple of posts in me (and proceeded to only post once), Arencibia was the other planned topic.

Fortunately, I couldn't come up with anything that the ol' MSM hadn't already said (after coincidentally latching onto him as the topic du jour)...leaving you to to it.

A stroke of good fortune for the readership if ever there was one.

the Jays can take a chance on JP with the acquisition of d'Arnaud. it he is looking completely out of place after 6 weeks then send him down. i don't see much of a downside.

the Jays are rebuilding but there is no reason rebuilding has to take 5 years. I'd like to see them cram as much development into this year as possible.

also, who is backing up 3B and 2B this year?

Catchers blossom late. He's healthy now, let him be the man at AAA and grow into it.

As much as I'd like to have JP on the roster to grow with the other young guys, I don't see The Manager having ABs for him. I mean geez, he can't even give Ruiz ABs.

Hmmm... perhaps we let him rake a bit, then deal him with Frasor to the Cubs for one of their SS prospects?

d'Arnaud is the catcher of the future as far as I am concerned. I would use Arencibia as trade bait to fill another need (ss). I don't think he will ever find the patience to be the big leaguer we need to build a championship. Hackers will always be hackers and hurt you with outs.

I think he turns out to be Barajas 2.0 but with prospects you always hope for better then that.

Has D'Arnaud ever hit 27 homeruns in A/AA?

To proclaim D'Adnaud the future of anything is ridiculous. Its too early for that... In 3 years he could be playing 3rd base or not even playing baseball for the matter...

The point is don't get your heart set on a catcher who has yet to hit high A... Its too far to know if he is for real or not.... Obviously its nice if he turns out to be the catcher of the future... But remember going into last season Arencibia was a higher regarded prospect than D'Arnaud is now, and then had health problems which are now fixed...

Health Problem = Letter to get out of PE

Because of the eye and kidney problems we don't know who JP is. For a guy that can't see and pass urine to hit 27 dingers - that ain't so worse.

It would be a crime against humanity to trade JP now before we see what a healthy guy with two eyes can do.

Gonna be a fun year in the minors on SO many different levels!

Even when JB makes a decent point, it's annoying because he repeats it over and over again.

Much has been made about not rushing prospects. Nothing wrong with AAA.

Another couple of catcher's who ditched the catcer's mask was Carlos Delgado and Ed Sprague.

jmac backs up 2B and 3B, but mccoy should.

if cito doesn't platoon overbay with ruiz or dopirak, i may lose it.

I have read this post twice and I am trying to figure out where I repeated myself.

Start the presses & line up for memberships - the Jose Bautista Appreciation Society is about to begin it's membership drive if jo-bau keeps up like he's doing!

...er, those would be the presses responsible for printing the membership cards, in case that wasn't clear.

JB: You don't repeat yourself within a single post, you just repeat the same posts over and over, both here and at the Drunks.

One thing's for sure: you know how to beat a dead horse.

I didn't know the catching situation was a "dead horse".

JB, your opinion that D'Arnaud is the new catcher of the future, that JMac is overpayed and wasting a roster spot, that OBP is the be-all and end-all in the game, that you're unclear about your sexual orientation... have i missed any?
oh yea, cito sucks.