We're hip to a Delgado comeback 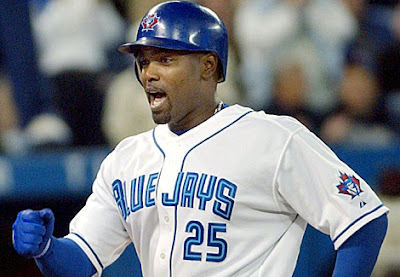 At the risk of sending our personal favourite Jays blogger into paroxysms of rage (sorry, Drew), allow us to give into sentimentality and nostalgia for a moment as we suggest a return engagement in Toronto for Carlos Delgado. (Who just returned to action in the PR Winter League...Topical!)

Before you pile on too quickly and let us know that we're becoming a dunderheaded old softy, we'll acknowledge right up front that this is a kinda bad idea. Bringing in Delgado would, as Keith Law noted last week, take at bats away from Adam Lind, Travis Snider and/or Brett Wallace. And that wouldn't be a good thing.

Having said that, we're not exactly convinced that you can pencil in the McGuire Twins in for a full season of good health and the same 30 homer, 100 RBI season that Lind put up last year. Provided Delgado comes in with a reasonable contract demand, he could be a very compelling low-risk, high-reward reclamation project for 2010. Delgado, who posted a 38 HR/118 RBI/.871 OPS in his last healthy season, could provide significant offensive punch in the middle of the Jays' 2010 lineup, while satiating the market's need for a recognizable "face of the franchise" type.

Essentially, this comes down to a question about Wallace's progression (does he need MLB at bats to improve?) and Snider's defense (does he need to play left, pushing Lind to DH and Delgado out of the picture?) Also worth considering is what would happen to the lineup of The Manager were provided a piece like Delgado, because The Manager likes his old reliable guys in the middle of the lineup, come hell or high water. But would King Carlos be any worse of an option than Kevin Millar? (Of course, Delgado wouldn't accept Millar's role, so this is probably all moot.)

Okay, fine. It's a lousy idea to bring back Delgado. But I'm a sad Peter Pan right now, and I want some comfort. I want to believe that Delgado could come back and recapture some semblance of his former glories, and that he could be a part of something more than just a year of hell in Tank Nation.
Posted by Tao of Stieb at 1:25 PM

To me, this is different. Delgado wouldn't be a cynical sentiment for sentiments sake play, it would be an attempt to better the team by acquiring a still-excellent player.

Imagine the 2008 Jays gave 500 PAs to Delgado instead of Stairs and whomever else? Massive upgrade.

Unfortunately, the stealing at bats point is a valid one for a rebuilding team. But I back Delgado and would be quite alright with him in a mentor role.

I go back and forth on this one as well. However, at the end of the day I think it would be a good signing because:

a) one of Wallace or Snider starting in the minors is a good thing, and chances are both will struggle against major league pitching this year.

b) If Delgado plays well, his cheap incentive based contract would be very valuable come the trade deadline. As I said before, the Jays need to be creative in adding talent to their organization, and signing cheap free agents with high upside is one way to try and acquire the necessary chips to play with in order to acquire young talent.

Delgado might have been a good fit somehow for the 2008 Blue Jays, but not the 2010 edition.

Funny, too, how we all just assume that Lyle Overbay is going to be playing somewhere else next year.

I'm not really on board. I kinda sorta want to be, but I'm not. Mainly for the reasons you mentioned (AB theft). Also, I think I'd rather see a right handed masher between eventual middle of the order mashers Snider/Lind....but I guess that's not a 2010 issue.

Though, it does bring to light an issue that I wanted to post about but forgot to (read: lazy)....when is The Overbay Situation going to be resolved? Or will it be?

I just don't think that there is much of a market for Overbay, in spite of the fact that I think that he's very capable and would put up huge numbers in the right ballpark.

I suspect that the Jays would end up having to eat some of his salary for next year if they were to get anything of value in return.

I swear my comment was independent of Tao's above me.

But, yeah....packaged with an arm? With a useful reliever as a salary dump, or with a young SP for a more significant return? But I guess I'm treading into MLBTR commenter waters here. I'll stop now.

I think Delgado makes sense if Overbay's gone. He only takes at bats from Ruiz or Dopirak then. And we can move him to a contender at the deadline (after he blazes his 474th-500th homeruns for the Jays).

Originally I was hip to the idea of Delgado coming back, but now I'm not so sure.

I was all for it back in October (before Doc was traded and the new "building phase" started), however if the Jays were to sign Delgado now, it seems like more of a PR move than anything else.

Don't get me wrong, I love Delgado as much as the next Jays fan. It seems like AA is trying to assemble a leaner, meaner, younger team - and Delgado just doesn't fit the fold.

Use the money that WOULD be spent on Delgado and beef up the offer for Aroldis Chapman instead.

I realize I am totally contradicting myself from what I said about Delgado a couple of months ago ... maybe it's the AA Kool-Aid that's gotten to me.

@ Ian: This is from Blair in today's Globe: Chapman, 21, wants $20-million to $25-million (U.S.) and know what? In an odd way that fits in with the Blue Jays philosophy of doing what they can to get high-ceilinged talent into the fold. For GM Alex Anthopoulos, it’s less of a gamble than a major-league free agent because it will be easy to keep Chapman out of sight/out of mind for a while. It’s just money that won’t be going to the major-league roster, anyhow.

Chapman and Delgado, and everyone shuts the fuck up. Awesome.

(And my apologies to Brian Dopirak. Who I would have liked to see get a taste of some action this year.)

(Wait, am I already acting like this is a done deal?)

Other than to pacify the fans, this would be a bad move. Honestly, I'd rather give the AB's to Dopirak or Ruiz, provided they're willing to put Lind in LF. See what you have with those two and then bring up Wallace later in the year if they don't work out.

Delgado would be worth it if it would push the Jays over the hump, but even with him they won't be making the playoffs, so why waste the money?

Watching Carlos Delgado play is NEVER a waste of money.

He's a great player, but I feel very little nostalgia about Delgado. And I don't see how it fits into the building strategy. I'd be pretty shocked if AA makes this move.

I'd like to see them package Overbay with Downs to get a CF/RF prospect. They could eat some salary too. This year, I'll be watching individual numbers, not the win loss column.

If they want to get more bums in the seats at Rogers Centre they can lower the price of beer and have "So you think you can dance, Toronto?" competitions.

Wouldn't Carlos try and find himself a spot on at least a fringe contender before he commits to T.O. anyway?

The Blue Jays are a fringe contender.

Eyeb - I think abigail meant: "on the fringe of contending" -- not "contending for the fringe".

And I'd say no on Carlos, but he played mostly during my "away" years, so I'm with Darren on feeling little nostalgia. Maybe if nostalgia factors in, this makes more sense. Not a horrible idea, but not a great one.

Assuming Overbay is gone why can't the Jays do Lind (LF), Snider (RF), Ruiz (1B) and Delgado (DH)? If we're not trying to win than who really cares about defense so long as everybody gets a chance to play?

Wallace can learn 1B fulltime in AAA and be ready for a fulltime gig in 2011. He wasn't that great last year in AAA, and he played in the PCL which is a hitter's league. If Delgado is injured/traded or Ruiz stinks than Wallace can get a shot at some play time.

I agree on Lind and Snider at LF and RF. Give them a chance to see if they can handle the outfield in the year that doesn't matter. Snider especially seems to have the ability to play RF, according to scouts, at a decent level, so I think it would be a mistake to immediately shift him to LF when he's never really got a chance to play RF full time in the majors.

The market's pretty saturated with DH types, so considering the apparently league-wide lack of interest in Delgado I'd rather wait until February or March and sign him to at least be this year's Kevin Millar if not the everyday DH/1B. That might be the best kind of offer he'll get depending on how the market develops for him. Remember, Frank Thomas couldn't get a job last year, and that was a market that didn't also have Jack Cust, Vladdy Guerrero, Johnny Damon, Jim Thome, and an assload of other DH options available (not to mention guys like Matsui and Glaus who've already been picked up).

Delgado's health is all. If people think he's healthy, he's MILES better than Cust, Thome, Guerrero, etc. If not, he should retire.

Makes no sense in T.O. unfortunately. We've got Overbay, Lind, Wallace, and probably Snider whose long-term position is either DH or 1B. And that's not even counting Ruiz (who shouldn't make this team, and won't).

Overbay and Purcey might get you an outfielder. What would it take to get Saunders out of Seattle. Their GM seems slightly retarded these days.

Overbay and Purcey might get you an outfielder. What would it take to get Saunders out of Seattle. Their GM seems slightly retarded these days.

Are you talking about the same Seattle team I'm thinking of? Because their GM just ass-raped the Phillies to get Cliff Lee, got rid of one of most overpaid, awful pitchers in baseball and received a batter with tremendous upside in return, signed a very good third baseman, and made a trade for Brandon League that by all accounts made sense for what the team is trying to do right now (win the AL West this year).