There's no more love for The Manager 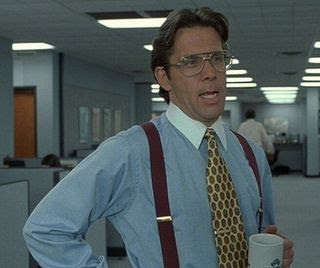 So we hear that The Manager has made his way to Indianapolis, and is interjecting himself into the discussions of who the Jays should take a run at this offseason.

Apparently, The Manager has some love for Milton Bradley, and he supposes that if there is one cool cat who can reach out and find the inner peace in this swirling headcase when all else have failed, it is he, The Manager. Maybe he's right, but we're actually really hoping that he's not going to have the opportunity to stick around long enough to shepherd the Weak through the Tyranny of Evil Men.

We can barely deal with the thought that The Manager is going to have his time with the media today to grunt and grumble while making a handful of irresponsible speculatory statements about his team ("Accardo's in the mix as a starter") and generally throwing the team under the bus ("We probably won't compete for nothing this year, or any year...").

For a guy who we used to defend endlessly, and whose appearances used to get us misty-eyed and nostalgic - we own a bobblehead of him, fer chrissakes! - we have precious little patience left for The Manager.
Posted by Tao of Stieb at 10:02 AM

Email ThisBlogThis!Share to TwitterShare to FacebookShare to Pinterest
Labels: The Manager, Winter Meetings

Ya know, if we're stuck with The Manager for another season in the dugout (& infinte more in the front office), then I hope he goes full-on batshit crazy. Make things interesting.

"Chavez played well, he deserves a shot to be our everyday guy back there."

"Well, we're going to need Scott Richmond to step up and be that ace righty for us now."

"Dustin McGowan's not coming back. I think he's done."

"I'm glad we've got Johnny Mac back - he's the leadoff guy we've been looking for."

"I expect our pitching to be better, because now we have a coach who knows what the hell he's doing."

Hate for the Cito? Comeon!

It's just a one year interregnum of no consequence, so what he says or does won't have much weight. Really, 2010 is about bailing water, so Cito or no Cito, hell, have Don Rickles manage for **** sake, next year means squat. The roster says it, AA knows it, and the Beest is reluctant to admit it.

All I care about for 2010 is that the young arms stay healthy and progress and that the bullpen gets managed decently. To be honest, I wouldn't mind a Pirates-esque quest for fail just so young squire AA can salivate at drafting first over all, hence justify all those drachmas being shelled out to his scouting staff.

There's a lot of shitty players who have been drafted first overall. There's no need in baseball to tank your season to that extent, because you can get a franchise-changing player at pick 4, or 7, or 12, or 50 if you are clever enough.

And I don't want to wait another year for shit to happen.

I deal with an ADM here who's a spitting image of Lumbergh. Everytime he passes my office I expect him to ask about my TPS reports.

Who's hitting lead-off for the Jays right now? And not that I need the Jays to be the 80s Cards or anything, but is this team the slowest in the league?

You're in my head, dude.

I'm warning you now - post this weekend will probably include a new tag - "Fuck waiting".

I'll have to dig it up somewhere, but there was a stat that came out in the offseason saying the Jays were, like, the fourth best baserunning team in the league.

Extra bases taken and first to thirds and that shit. You know, the stuff that matters more than getting your ass thrown out, like Chone Figgins did 17 times (versus 42 SBs) last year.

Vernon, for all of his faults, is still a fast and smart runner who goes first to third as well as any Jay I've seen.

So, no, not the slowest in the league.

(And will someone help me find those baserunning numbers?)

Tao, your word is good enough for me and I seem to remember Wilmer going on about that. They just look slow. I'm totally on your side with Vernon as a baserunner. As long as they're not using Scott Downs as a pinch-runner anytime soon.

I would like to see at least one good defensive outfielder on the bench who could give Vernon a lot more rest (is Jose Bautista on the team next year?)

Fuck The Manager. Fuck waiting, too.

Sounds like Tom Petty has a good chance of being the Friday Rock Out -- except I mentioned it and now he won't be because Tao is a contrarian prick!

What's with you and Tom Petty? WTF?

All this talk about waiting. You know, how it's the hardest part and so forth.

AA must tread carefully here. If he were to add two switch hitters in Bradley and Doumit, and be unable to deal Doc, he runs the risk of fielding a pretty solid team next year.

I think a Bradley move, if the Cubs cover some salary, could be a good half year investment. Build up his stats and deal him at the deadline.

How is there any way possible that Cito and The Game get along?

The Game? Pretty sure they beefin. Cito vs The Game was on Beefs Vol VII

Makes you hate him a little less, no?

Look, I will force Cito to change his ways, and adopt neoteric strategies.

Firstly, vs. LHP, Bautista will be at the top of the order, and vs. RHP, Overbay will hit leadoff. OBP is more important than speed at the top, I know this, and even if Ovebay and/or Bautista are gone, the OBP leaders will hit 1-2. I am very smart, and incredibly handsome.

Secondly, Cito will be wearing a next generation Rogers Bluetooth Comm-Earbud (still in the R&D stage), with my voice in his ear, constantly feeding sexy tactics and strategies to his semi-senile brain(if I allow him to manage at all this season).

Don't worry, the bullpen, PH and defensive substitutions will be handled by an incredibly impertinent, resourceful, dapper and virile individual. Me.

@ Gill Fisher: This team will shock the world, with or without Doc. I have secretly built a club that will win 85+ games.

@ Sven the Swede: I have my sexy eyes on your "office".

Hey Tao or Ack:
Are you guys working on a Top 5 Rule 5 by the Jays? Jorge Bell #1?
Bell
Gruber
Henke (not positive)
Manny Lee (well the first 3 were great)
Lou Thorton (can't argue with Sweet Lou)

I'm sure there's others in the top 5 before we get into the 85 bench.

Mr. Tony, is that in a good or a bad way directed at my office?

Jays get Gathright. The Sox fill their catching need with Max Ramirez. Dear Alex, when Tao said he wanted a "shiny new toy" under the tree, he meant more of the Ramirez kind of shiny than the "Rolex from the street corner" type of shiny.

Cito: "Yeah...I'm gonna ask you to go ahead and not punch that umpire in the face, Milton."

Milton: "but that's my stapler!"

Dear Author taoofstieb.blogspot.com !
I apologise, but, in my opinion, you are not right. I am assured. Let's discuss.

Oh my god, there is a great deal of helpful data above!