A mother of a day for young Brett 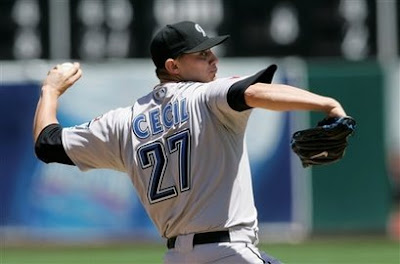 It might be a touch presumptuous after just two starts, but we think that Brett Cecil is making a good case for the fact that we can't read too much into the pitching stats for Jays prospects in Las Vegas. After getting shelled in the high elevations and dry air of the Pacific Coast League (to the tune of a 8.31 ERA), Cecil has looked stellar in his first two starts with the Jays.

Yesterday's eight innings of five hit shut out ball (with six strikeouts versus two walks) in a 5-0 win over the A's likely complicated the Jays' decision-making process for what to do in the next week or two with the surprising surplus of arms in the rotation.

The conventional wisdom seemed to be that Robert Ray and Cecil would make their way back to Vegas to make room for Casey Janssen and Ricky Romero next week. But until Cecil demonstrates that he's not ready to pitch in the Big Leagues, we don't know how you can drop him from the roster.

Alex Rios is a productive mess
So Cito comes out this weekend and tells the media that Alex Rios' swing is a mess. Well duuhh.

While Rios has been a bit more productive of late (including a homer and three RsBI yesterday), his swing is still all over the place, and he seems as though he's trying to pull everything. Elsewhere in the blogoweb, we've seen people suggest that the Rios doubters just STFU already about his performance. But in spite of some desirable returns from the Blissfully Oblivious Gazelle, we would make an argument along the same lines as Ghostrunner LtB's about Cito's decision making: Don't confuse the outcome with the process.

Sure, Rios is going to have good days at the plate, but if he doesn't address the problems with his swing, they will be few and far between in the long term.

Oh, yeah, about Tuesday's probable starters
Halladay versus A.J.. Are you freaking kidding me? We're going to spend the next two days in a girlish tizzy of anticipation.
Posted by Tao of Stieb at 10:37 AM

Welcome back, Tao. Hope you had a good weekend.

"A girlish tizzy of anticipation."

I couldn't have put it better myself.

We spent the weekend working, so how good could it be?

I think at this point, you let Cecil go until at least Litsch comes back. When Romero & Janssen are ready, you stick Janssen in the bullpen to take Tallet's prior role. Then the next time a starter is needed, you call on Janssen instead of the minors.

Doc, Richmond, Romero, Cecil (replaced by Litsch as soon as he's ready in order to keep his innings down) then Tallet. If at any point Tallet or Richmond (or Litsch for that matter) start to shit the bed, you go to Janssen. That hopefully should get us through until Marcum is ready. Cecil would be available for a second tour down the road as well.

p.s. David Purcey is dead to me.

Cecil be real cool 4 a white dude. Homeboy's got flavor, shutting down them broke Ass As. Man, brotha Cecil busted it up serious like. I gots ta get to TC man. Brothas be bugging 'coz of Cito. Man, Cito 's got some crazymadstupid style. Botha gets down. Cecil's got a white mask on don't he? He ain't gonna be Doc JR BUT a white Bob Gibson! All cecil need to do is eat some KFC, drink some grape soda and THEN come on down to the hood! We will treat brothaman Cecil well.....

Fool don't got no brains anyhow.

All y'all I can't bear to watch dem damn Yankees take one game this week. Jeter wif his fine mulatto loooks, Aroid wif his phony ass smile and Joe Girardi is uptight like. Brotha Joe seem like he constipated up like that! Crazy ass brotha Doc gonna smack around da Bronx Bums. The Yanks be so white , they ain't got no flava. Cito be busting out all his finessness and making it real. Homeboy cecil is so unreal, white bot know how to groove. We are gonna slap around dose billion dollar white boys AND get down after baby boys. Prize is a Halle berry lookalike named Naquisha I met down in the Hood........

I tossed out my viagara, cuz Cecil's giving me 5-day wood.

Can't wait for todays match up. Check out AJ in The Joker T-shirt. What a clown!

Doc and AJ. Let's get ready to rumble!