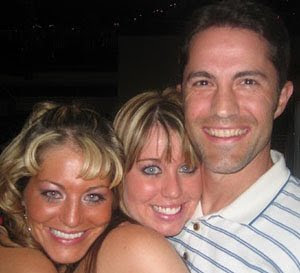 Let's just get this out of the way, first and foremost. Mike Mussina sucks moose dong.

Aside from that, there are numerous reasons for us to add the Yankees has-been to our list. Most of which were more eloquently summarized by the commenters in this morning's post. But we'll summarize the summarizations.

-He showed up Cito: In the 1993 All Star Game in Camden Yards, Mussina got up in the bullpen in the late innings like a petulant teenager, trying to force Cito Gaston into playing him. This, of course, elicited wild applause from crack-smoking Bodymore, Murderland crowd. (Green House Gas is hot! Get it! Greehouse Gas!) Cito had no intention of putting him in (why would he, with Duane Ward on the mound?), but Mussina's presumptuous act resulted in years worth of hostility towards Cito from the Orioles' faithful (stupid bastards). Mussina repaid the team's loyalty by signing with the Yankees.

-He whined about the inconvenience of a ceremony honouring Tom Cheek: Sorry you got thrown off your routine, there, doucheboy. It was only a brief ceremony to honour one of the most important figures in the history of baseball in Canada, and a man who had fallen ill. So sorry that you had to soft toss for a few extra minutes in the bullpen. Your routine should really take precedence over giving a man of humble greatness the recognition he deserves.

-He's a Yankee: And all Yankees are inherently douchebags. (Yes, Derek Jeter included.) Also, we'd like to point out that the Yankees have won exactly ZERO World Series since Mussina arrived. Coincidence?

-He was in an overly precious documentary about doing crosswords: Yeah, this one. It was actually really pretty dull, and Mussina was the dullest part of the whole thing. But we're so pround of your linguistic skills, Mikey. You're super smart. We bet you could kick Johnny Damon's ass at Boggle. Smart guy.

-We hate his teeth: Nice chompers.

-He's tonight's starting pitcher: That's kind of the short view. Still, it's relevant to us.

For all of these dubious achievements and more, we welcome to the Mike Mussina to the Tao of Stieb's Enemies List. Guard your grill, jackass.
Posted by Tao of Stieb at 2:50 PM

Mike Toth is on Prime Time saying that people are up in arms over the Roy fight, but are willing to laugh about Osama Bin Laden.

Let's just say I have some issues with Mikes today.

Toth is such a tool. We like how he's constantly playing the morally indignant "As new father" card.

Yeah, like procreating has afforded him such incredible insight...

Mike Toth procreating. Damn it all, we've just spun back into a PTS-induced depression.

This blog is slowly devolving into a bitter bitchfest. So, how are you different from Jim Kelley again?

Oh yeah, he gets paid to be a douchebag.

Hey Tao, I have a big bag of Fucks you can lend this cat to Off.

re: Mussina.....now we're talkin. Now we are fucking talking!

gotta say, it was pretty sad watching him toss tonight. Dude isn't a big league arm anymore. 15losses if he stays in the rotation all season, which he won't.

gotta respect a guy who admits to overzealous douchebag dial cranking. me, I just leave 'er around a 7 or 8 at all times. you know, to be consistent.

Alright, alright...it appears I have dialed up my own douchebag factor a bit too high, but the Ack kinda makes my point...Mussina? He's been low-end for a few years now. Think the Yanks wish they could "Hold back the years" on that contract Mick Hucknall style? Yeah, probably.

Always freaks me out when a professional athlete is a bigger dork than me. (In my estimation, anyways. Leaving aside the fact that I would literally cut of a finger for one year of Moose's salary.)

In the interest of full disclosure, the removed post was me. I didn't change the content, just corrected some typos.

Are you kidding me? Jeter is the douchebag par excellence. His douchebagginess is so profound it could only exist in a Yankees uniform.

At this point, we'd pay good money to see the Ack and Priest go at it in the octagon.

And we hate mixed martial arts.

plus, I'm more eckstein than thomas, so I'd much prefer running my mouth over the interweb.

At this point, a ring entrance alone would leave me gasping for breath and in danger of puking, so I don't think we're talking Serra vs Hughes here.

Tao won't get that reference though.

I live in Williamsport, know the Mussina family, and have eaten at the same table as Mike one a couple occasions. He is NOT that good. He will not make the HOF and doesn't deserve it. If he wanted the HOF he shouldn't have retired. He did so because of several factors, stated and unstated. Interesting that since he's retired, nothing willlikely be done about his usage of performance enhancers. His numbers do not warrant HOF status.

Should Mike Mussina be in the HOF?

He played 18 years, 10 with Baltimore and 8 with New York. Ironically, the New York Yankees started out as the Baltimore Orioles.

During his time with the Birds:

During his time with the Yanks:

The biggest thing I noticed was the fact that his completed games dropped off significantly during his time with the Yankees as did quality starts, but his innings per year didn’t. He started more games, but won less. He won more than 50% of the games he started in Baltimore, but less than 50% in New York. Even with a better team, better pitching staff, and a much better General Manager, Mussina did not fair as well as he did with the Orioles.

Mussina averaged a win less per year with the Orioles, but almost a 3% share of wins more. The Yanks averaged 32 games above .500 when Moose played with them, but when he played with the Orioles, they averaged 3 games above .500. When you look at his post-season numbers, it’s more clear why Mussina is not a Hall of Famer. He can’t win when it counts, the post-season. He’s two games over .500 in the post season and faired the same no matter which team he played for.

He played in an era where 250 wins weren’t as important a milestone as 300 wins were. He played in an era where performance enhancers ran rampant. I have been saying for a long while that players need to prove they were clean since most are hiding behind the MLBPA and not speaking up about what went on. Especially when you play on teams that had so many PROVEN users, it’s not hard to speculate that Mussina could have pitched 200 innings per year due to a little “boost.”

When Mussina left the Orioles they sucked bad, but before that they were a decent team. He never had Ace numbers and had an excellent closing staff at New York. This one, to me, is a no brainer, no HOF for Moose.