Lyle is the Linchpin 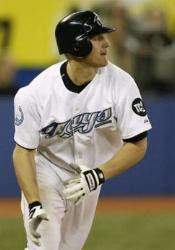 When we think forward to the 2008 season (just weeks away!), the one notion that keeps coming back is this: If Lyle Overbay doesn't hit, we're screwed.

This isn't to say that the Jays don't need a better season out of Vernon Wells (.706 OPS in 2007...yeesh) or for Scott Rolen to return somewhat to form. But for whatever reason, we keep coming back to Overbay as the key in the Jays lineup next year.

Obviously, there's an easy explanation for Overbay's decline last year, as he went into the tank after getting hit on the hand by a John Danks pitch on June 3rd. His performance in most categories up until that time was close to his career average (15 Doubles, 8 HRs, 28 RsBI, .796 OPS through his first 55 games).

Lyle's second half was nothing short of disastrous (67 games, 15 doubles, 2 HRs, 17 RsBI, .620 OPS), and while his smashed-up hand may have been an explanation for his steep decline, the Jays can't carry those sorts of numbers for any extended period from a corner infielder for any reason.

Not that we want to be a Cassandra here, but Overbay is turning 31 this year, and there's at least a bit of concern that we're going to start to see his bat speed slow, and an overall offensive decline ensue.

Overbay spent most of the 2007 season splitting time between hitting second and sixth, and his numbers weren't significantly different in either spot (.721 OPS hitting second versus .740 hitting sixth in small sample sizes). Wherever Overbay ends up in a revamped 2008 lineup, his ability to get on base, keep the line moving and drive in runs at a pace closer to his 2006 performance (92 ribbies) will be a crucial determining factor on the Blue Jays' ability to compete in the ever-strengthening AL Wild Card race.
Posted by Tao of Stieb at 2:10 PM

I like Overbay (the healhty, pre-contract extension version) hitting fifth after the swollen hurt and ahead of Rolen.

If only Aaron Hill could learn to switch hit.....

Don't worry about being a Cassandra, I don't believe for a second he's in decline at 31.

I fully expect a big bounce back and return to form from Lyle in 08.

I can't see Overbay being of that great importance to the Jays.

He's always been primarily a doubles hitter, and while that's nice and all, it usually doesn't translate into a 100 RBI type season.

I don't want to give too much away as I have an article brewing but to give a sneak peak, over his last 70 games played he hit 2 dingers. Yippie!

....he also played with a busted up hand last year, that might sap some power, you think?

20 taters and 40 doubles for Overbay this season.

I'm a Lyle believer. The big question is; what round should he be selected in for a 12 team 5x5 roto league draft? I say he breaks out for 25 taters with 105 ribeyes.

Wait- a SABR blog is touting the importance of HR and RBI above all else?!

12 team 5x5 roto mixed league, Overbay gets drafted after the 20th round, or goes for less than $10.

There's just too much depth at 1st for him to go higher.

Goddamn it, we're getting twitchy waiting for our roto drafts to start.