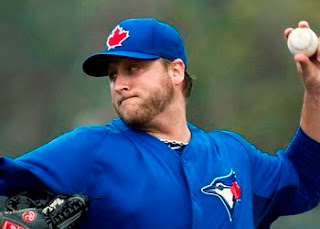 Provenance: Born in St. Charles, Missouri, a half hour west of St. Louis. Drafted in the 38th round of the 1998 amateur draft by the Chicago White Sox out of Jefferson College.

Acquired: Acquired from the Miami Marlins as part of an 11-player deal in November, 2012.

Recent Injury History: The personification of good health and reliability, Buehrle has yet to spend a day on the disabled list in his career. In twelve seasons. Let that sink in.

Looking Back: When the Marlins first signed Buehrle to his progressively costly four-year deal in the middle of their offseason splurge a year ago, the thought was that he was a very good pitcher but not worth that deal. And those last two years? Those were going to hurt. They might even be stuck with an untradeable asset in the end.

That's the nature of free agent contracts, though, and with the influx of new cash in the system, a bad deal or two can fit into a payroll without forcing a team into a hard or unpalatable decision.

Where this may become an issue is if Buehrle does not take to Toronto, especially in the absence of his family and beloved pit bulls. The option to separate himself from his family for the sake of their banned-in-Ontario terriers seems like one that will weigh on him personally, and it hardly seems like a tenable solution over the next three seasons.

On the other hand, even if the Jays were willing to move Buehrle for personal reasons, it seems unlikely that many teams would eat the last two years of his deal, much less give Toronto anything in return.

Looking Ahead: None of this speaks a word to Buehrle's performance. An efficient and reliable pitcher, Buehrle consistently wrings more than one would expect from an arsenal without much heat.

Essentially, he has thrived for more than a decade with the sort of stuff that gets Brett Cecil demoted. Where Buehrle succeeds is in his ability to throw all of his pitches for strikes, not allowing hitters to sit on a specific fastball or breaking ball.

Buehrle has also won four straight Gold Gloves, and does a nifty job of shutting down opponents' running games, allowing only five stolen bases in 2012 against three runners who were caught and four who were picked off.

There's a line of thought that the legendary speed with which Buehrle works - he's always among the league's five fastest workers - is the difference in keeping his own fielders on their toes while keeping opposing hitters off-balance. It's a notion that sounds a little hokey in this age of precise weights and measures. But the collection of skills that

Regardless: Buehrle's presence and the absence of Jason Frasor means that Jays fans might have an additional few hours of "me time" this summer. Use them as you will.

Pessimistically: Buerhle's return to the AL is inhospitable, especially in the funhouse ballparks in the Bronx in Boston. Misses his puppies, and hits the DL with a bruised heart. ERA finally matches his FIP, and bumps up over 4.40.

Optimistically: Keeps doing that thing he does, defying the odds, and math and nature. Makes 30+ starts and posts an ERA under 3.80 while providing sage counsel to Ricky Romero and Brett Cecil.
Posted by Tao of Stieb at 9:56 AM

Maybe if he does very poorly and misses his dog too much, he will retire and leave those last couple of years on the table -- seeing as he supposedly considered retiring this off-season.