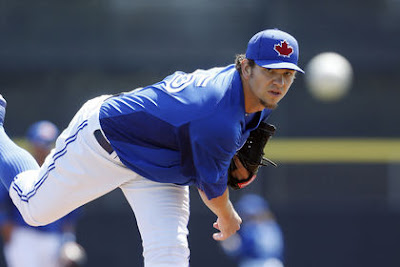 Provenance: Born in Minneapolis. Went to high school in and around Tulsa Oklahoma.

(Pause while I go listen to Don Williams' "Tulsa Time", which is a great song. Sorry. Onward.)

Selected in the fourth round of the 2002 amateur draft by the Florida Marlins. Made his major league debut at the age of 21 on September 10, 2005.

Contract Status: Entering the final season of a four-year, $39 million contract. Will earn $13.75 million in base salary this season. Bonus clauses include $1 million payout if he is named World Series MVP and $500,000 for winning the Cy Young.

Recent Injury History: Started only nine games at the start of 2011, before being sidelined with shoulder inflammation. Had previously missed the final month of 2010 with the same ailment. Had Tommy John Surgery in August, 2007.

Looking Back: Josh Johnson's 2012 season was one of the more scrutinized returns from injury in recent years.

After a remarkable 2010 season in which he won the NL ERA title (2.30), Johnson was set up to be one of the premier power pitchers in the game. He was building on that success admirably in early  2011 when his shoulder went awry, though the extent of the injury took a painfully long time to sort out. Though his last start was in May, he wasn't officially shut down until almost two months later.

That frustrating delay had fans watching throughout 2012 with a high level of trepidation. His fastball velocity, which dropped by more than two miles per hour from its 2010 levels (95.6 MPH), remained under constant scrutiny. A predictable mid-season dip in his fastball velocity raised alarms, but by the final starts of the season in September, he had begun to regain a couple of clicks on the pitch.

Also notable in Johnson's 2012 season is the increased use of a curveball. According to the Brooks Baseball database, he didn't throw a single curve in 2010, relying almost entirely on a four-seam/slider arsenal in that season.

For the most part, Johnson's peripheral numbers came back to their historical levels last season, though his inflated ERA is likely due to an uptick in his homer-to-flyball ratio. At 8.4%, last year's mark was double that of his 2010 season (4.2%, if you needed the math guidance), and marginally higher than his career mark (7.2%).

Looking Ahead: Johnson certainly benefited from playing in home parks that were sympathetic to pitchers through his first eight seasons.

He's held the opposition to a .623 OPS against between ProPlayer/Sun Life Stadium and the new Marlins Park, while putting up a still decent .692 OPS on the road. Still, he's never pitched in his career at Yankee Stadium or Fenway Park, so it will be interesting to see how the fun house atmosphere of those bizarro parks.

On the other hand, a pitcher who can miss a lot of bats can help to neutralize the effects of hitters parks.And thus far in the completely meaningless fake games of spring, Johnson has done a pretty snazzy job of sending batters back to the bench with their lumber in their hands, unscathed by leather. In his first four games, Johnson fanned 11 in 10.2 innings without walking a batter.

It might not be enough to proclaim that the fearsome hurler is back to his best form, but it's a nice sign in a spring that has elicited more than its share of caveats for poor performance by potential starting pitchers.

And since we're indulging in hoary old saws, it certainly bears mentioning that this is a contract year for Josh Johnson. It seems as though it is a long shot that the Jays will keep him in the longer term, but the question remains as to whether a great performance by JJ in the first four months will make him indispensable for the stretch run, or a key trade chip by the end of July.

Pessimistically: The deeper lineups of the American League make life more challenging for Johnson, bumping his ERA up and leaving him to minimize the damage from the fly balls that become dingers in some AL East parks. Shoulder/back/bunion pain (or what have you) undermines his season.

Optimistically: Regains his strength, while adding the wisdom and guile of age to his game. Asserts himself as a legitimate ace. Dominates in big games.
Posted by Tao of Stieb at 3:42 PM

Thanks for reminding me (singing) Don Williams exists. I had *completely* forgotten, but my ways have been mended.
Also, thanks and you do a great job with the baseball stuff and etc.

I think we may very well see that contract year bump, but I often indulge in the meta game of grit, determination, clutch etc.

Here's hoping the Jays have a reason to keep him through to the end of the season.