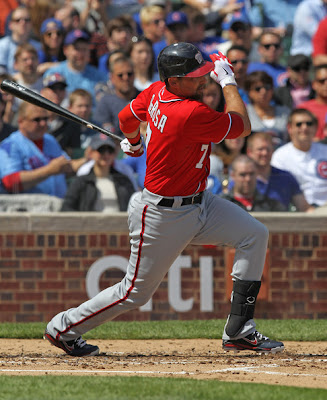 Of all of this offseason's signings, this is the one that I choose to discuss? Well, sure. Why the heck not?

Last week, in the midst of another unveiling of another big ticket winter acquisition, Alex Anthopoulos told Prime Time Sports that the team might still be looking for a 25th man, and there are few players who fit that bill better than Mark DeRosa at this point.

This isn't to dump on the player at all. There was a moment in his career when DeRosa seemed like a pretty legitimate guy, posting a .368 OBP and 109 OPS+ over three seasons from 2006 through 2008. The fact that he could be put just about anywhere in the lineup or on the field only added to his value. But a series of injuries hampered his performance, leaving him tucked at the back of the bench for the Cardinals, Giants and Nationals.

DeRosa's output has been at sub-Menchersonian levels in recent seasons: .309 OBP, .269 SLG with one home run in 302 plate appearances over the past three campaigns. His versatility in the field should be an asset, but even that can be overstated if you only glance at which positions he's played. Last season, DeRosa did make appearances all over the diamond, but he has mostly settled into a role as a fifth outfielder with the occasional emergency assignment around the infield. Last season, his forays at were limited at first (4.2 innings), second (3.0 innings) and shortstop (9 innings in one start). He can still play his old position at third base regularly if needed (128 innings over the past two seasons, and 519 in 2009), though there's seemingly some redundancy at that position for the Blue Jays already.

(Then again, with Brett Lawrie being the starter, an extra contingency plan couldn't hurt, right?)

So what's the value of a guy like DeRosa? The temptation is to set aside the "affable veteran" aspects that he brings to the team, because that seems like a big blanket to cover over some significant flaws. At the same time, these are some pretty low stakes that we're discussing, and maybe it is unwise to pull out the oversized detective's loupe when parsing over his value.

For the hundred plate appearances that DeRosa might get in a Jays uniform, his output in game action will probably be far less significant than what he does in the clubhouse, on the team flights, in the dugout and all of the other places where the players congregate when not in the field of play. Unfortunately, we're not there to see how those moments play out, so we'll just have to hope that the handful of raves that DeRosa gets for his off-field congeniality amounts to something.

There's an argument that maybe you give a younger player the opportunity to tag along with the team over the year to gain some seasoning, but how many young players can you remember who benefited from sitting on the bench in their twenties? Did Derek Bell really learn anything from those great Blue Jays teams?

But this is mice nuts. So tiny as to be insignificant, and not worth any sort of angst. I doubt that any of us will look back upon the 2013 season with any amount of dread for this signing. Though I suppose I'd have said the same thing of Omar Vizquel last year.
Posted by Tao of Stieb at 4:17 PM

Big difference between this and Omar though. Omar had been a legitimate star and he was on a farewell tour. His stature demanding playing time. And I'm pretty sure Omar didn't see himself as the 25th man.

DeRosa doesn't have this baggage. He's signing knowing he's not going to get much playing time. Most other options out there wouldn't be happy with that. So this is one less headache for Gibby.

I also don't think that it hurts that he has playoff experience. For all the new people we've brought in, who's really been in the thick of it? That's experience that will help down the stretch.

I really don't get why everyone is so upset about this.

"For all the new people we've brought in, who's really been in the thick of it?"

So you're asking who has playoff experience? Not including Derosa...

I personally think Derosa is pretty useless in the grand scheme of things. He's pretty poor with both the bat and mediocre with the glove and he's not a burner on the basepaths so he's not even an ideal late game pinch-runner. Sure he's a better batter against lefties then Adam Lind (which doesn't say much) but there are lot's of folk taking minor league deals right now that are better then Adam Lind vs. lefties (to say nothing of the internal options who are better then them).

I'm just hoping I have the opportunity to use "mice nuts" in a sentence today.