Opening Up the Closer Role 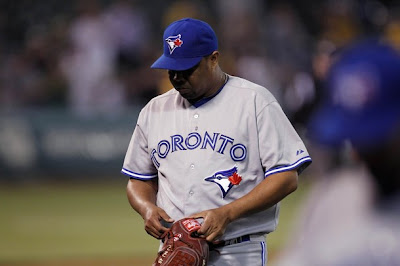 We won't fixate too much on last night's game because a) everything was fine when we went for our evening slumber and 2) we don't feel like poring through the ninth pitch-by-pitch to figure out what went wrong. Who has the time for that sort of misery?

So rather than discuss the flaws and failings in Coco Cordero, let's push things forward and think about what the Jays do from here to get the last outs of the game.

The temptation after another rotten end to a game is to depose one closer and anoint another. This morning, we woke up to a Twitter feed full a queries and suggestions as to who should be next in line to be marked with the Scarlet C, indicating their closerishness. And it's understandable that people would feel that way, because that conventional wisdom is deeply ingrained in the baseball fan's psyche: You need a "shut-down", "lock-down", "proven" guy taking the ball in the ninth.

But if you look at the options for the Jays over the next few weeks - as we wait for the real lock-down-proven closer to return - we wonder why you would even fill the role. You could place that title on Casey Janssen, or Luis Perez, or Darren Oliver, or call up Las Vegas closer Chad Beck. But does having someone fill that unofficial position really get you any further ahead?

Isn't the purpose of such a move to put the fanbase at ease? And doesn't that sense of confidence get shattered with the next blown save? (And make no mistake, there will be more. It happens. There's another dozen of these games waiting for us over the next five months, so gird your loins and get ready.)

Yes, we understand that John Farrell has stated that he likes for relievers to have a rough sense of when they'll be called upon to enter the game, but is it not possible to look at the lineup that they are facing, look at the past few days' usage, and figure out from day-to-day who is the most appropriate arm to get the next few outs?

"Closer-by-committee" has become a dirty word in baseball. It's a small-minded game sometimes, and many in and around the game - fans, media, punditry, front offices and field staff - are more willing to let one guy fail at his job repeatedly than to allow a different strategy to fail once. Moreover, there's a lot more blame that falls on the shoulders of the manager if a bullpen committee fails, which probably chokes off such an approach before it takes its first breath. If the by-rote following of baseball tradition ends up in a loss, the manager can shrug his shoulders and say: "That's our guy", and we all nod along like a bunch of bobblehead puppies in the back window of a Camaro.

We're not sure what John Farrell has up his sleeve at this point, but we'd appreciate seeing him actively manage the bullpen for a few weeks rather than falling into the trap of finding a "new" closer. That's the easy way out.
Posted by Tao of Stieb at 9:30 AM

No matter how much you try to go by committee, I believe that after a few weeks of this, the manager will have found a guy he feels comfortable with in the 9th, and will ride him... no matter what the matchups dictate... this is my biggest worry...

Frasor is the guy called in to bail another pitcher (usually the starter) out a jam. Most relievers prefer to avoid but Frasor seems to relish it. He comes in, slows the pace of the game down to a crawl and more often than not, keeps the other team off the board. It's a difficult thankless job that is more challenging than the closer's job and is ultimately just as important. Shuffle the late inning guys as you wish but let Frasor do the thing he does best.

My hunch is the reason it's playing out the way it is, with Cordero firmly entrenched as capital-C closer, is only because Santos is slated to be back soon. Because Farrell is a players' manager, and I think he'll want to stick with the having-the-players'-backs approach knowing that he only has to ride it out for another week or two.

If that's the case, it's playing a long game, and is a not entirely unjustified approach, though it's also frustrating to watch when it's the ninth inning of a game today.

During the offseason, Farrell said repeatedly that he felt one of his biggest mistakes last year was a lack of "defined roles" in the bullpen, and his lack "faith" in struggling relief pitchers. So for this year, he planned to have a capital-C closer at all times, and to continue using relief pitchers in their usual "defined" roles even when they're going through stretches of failure.

Given what's been happening with Cordero, I think it's clear that those are basically both the opposite of what he ought to be doing. He's not putting his pitchers (or, more importantly, his team) in the best position to succeed by doing those things. Hopefully he's smart enough to see that.

I really don't think this is about the Closer. The problem is not Coco in the 9th. It's Coco on the team. He has been AWFUL. Or worse. He's the Adam Lind equivalent for pitchers. Which takes me to the real problem on this team right now and the area where we should all be focusing our angst, outrage and frustration...Lind keeps hitting fourth! And he stays in the lineup vs lefties...and...FUCK! Why?

9th inning closers are dumb anyways. Relievers roles should be determined by how dire the situation is, not by what inning it is. If the game's on the line in the 7th or 8th you should go with the best available pitcher.

For example, if you've got bases loaded and none out in the 7th then you should probably use your best pitcher to get you out of it instead of having him start with a blank slate in the 9th (which, let's face it, really gives closers a cushier gig than most other relievers that are always cleaning up messes they didn't make).

Sure you won't have that best pitcher for the 9th, but why not let a lesser reliever start with the clean slate and hope they'll keep the team out of a jam instead of making them clean one up.

Whatever, managers are dumb and Farrell is no different. He's smarter than some, but on the whole they're pretty attached to pretty antiquated thinking...