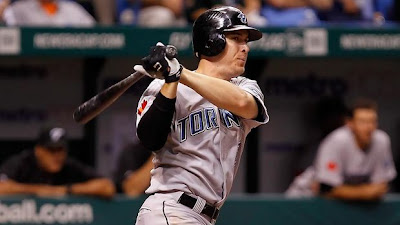 Tao-Approved Nicknames: KJ. It’s not original, but it works well in Twitter. And there’s something about Johnson’s time in Phoenix that makes that make sense.

Looking Back: The Blue Jays finally got their man when they landed Kelly Johnson after the non-waiver trade deadline, in exchange for fan favourite John McDonald and Aaron Hill. (And it really says something about the decline of Hill that the one-time All Star and Silver Slugger winner could leave alongside a bench player, and be the player whose departure the fans mourn the least.)

The Jays pursuit of KJ goes back to the 2010 offseason when they attempted to lure him to Toronto, with the condition that he would play left field. (Because apparently, you can never have too many options in left field.) Johnson rebuffed them at the time, choosing to continue to play second base in the desert of Arizona, in spite of the previous dubious reviews of his glove work.

His reputation as a fielder was established early in his career with Atlanta, where he posted negative Ultimate Zone Rating (UZR) numbers in each of his three seasons with the Braves. But since leaving the land of Tyler Perry and peaches, he has put up successive seasons on the positive side of that ledger (7.1 and 2.5 in 2010 and 2011 respectively.)

Upon signing him to a one year deal this year, Jays GM Alex Anthopoulos again mused about the idea of Johnson playing elsewhere (nowhere in particular...maybe someplace that rhymes with "deft yield"), a notion at which Johnson once again scoffed.

Looking Forward: In spite of being a middle-of-the-diamond player, it’s Johnson’s bat that seems to preoccupy most Jays fans, and his maddening inconsistency leaves one to scratch their head when pondering what we might see from him next year. Can he replicate his 2010 season with the Diamondbacks, in which he walloped 26 dingers and posted a stellar .865 OPS? Or can we expect a sub-.700 OPS, such as he posted in an injury-shortened 2009 (.692) or his final days in Phoenix (.699)?

It’s a fool’s errand to look at the 33-game sample after the trade in an attempt to find something to upon which we can hitch our hopes. But if you’ll indulge us as we rattle the bells on our jester’s hat, we note that Johnson’s strikeout rate dropped 3.9% and his walk rate went up by 3%, bringing those numbers into the same territory as his good years.

2012 Expectations: With John Farrell already angling to place Johnson in the second spot in the order, part of the Blue Jays’ early season offensive success will depend on him getting on base ahead of José Bautista. If Johnson can stop channeling his inner Mark Reynolds and demonstrate a patient approach, he could be a key piece of a successful season.

But as we attempted to game our way through a number of lineup scenarios this offseason, we kept finding ways to push Johnson to the bottom of the order. It's not inconceivable to us that he might end up hitting ninth by the time they crack open the lid on the Rogers Centre.
Posted by Tao of Stieb at 8:30 AM

I am shocked that Robinson Cano wouldn't appear in that list of second basemen with a high WPA, but he's been 4 or less.

Whom do you see at the top of the lineup? I'd love to see Lawrie, Escobar, Rasmus, Bautista... But we're probably going to get Escocar, Johnson, Bautista, Lind...