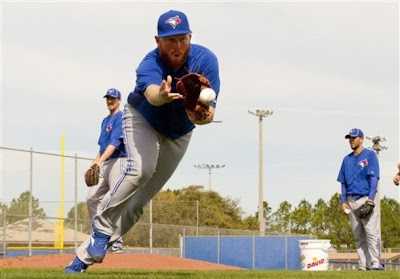 Tao-Approved Nicknames: Ginger Kitty. Don’t let your eyes deceive you, friend. He may not look like a varsity athlete, but he’s as nimble and spritely as a cat when pouncing on a ball hit in his direction.

History: Five MLB seasons and 88 games, including 67 starts, all with Toronto.

Looking Back: Since his surprise call up in 2007, Jesse Litsch has hung around the periphery of the Jays’ pitching staff for the past five seasons, though never really as an integral part. He’s never been a player for whom there have been high expectations, given that his fastball at best just ekes over 90 mph. He’s also never been – and we’re measuring our words here – a physical specimen that you could dream on or project. Still, with all of that middling prologue, it’s easy to forget that he’ll only turn 27 next month.

Litsch has improved his game in some key areas from his early days, learning how to put players away rather than depending on the good graces of his fielders. In his rookie season, Litsch posted a respectable 3.81 ERA, but also managed to strike out just 4.05 batters per nine. By last season, he’s increased that mark to a very serviceable 7.92, which will be especially important if he’s asked to pitch out of the bullpen this year.

His 2011 campaign is a hard one to judge, mostly because of how he was squeezed out of his spot on the roster by players with better stuff and lesser results (R.I.P., Summer of Jo-Jo). In his eight starts before relegation, Litsch pitched okayish (4.66 ERA, 36 Ks/18 BBs), though he only reached the seventh inning twice, and never pitched more than 6.1 innings in any start. Litsch threw a lot of pitches, averaging 100 per start, and 3.94 pitches per plate appearance.

Oddly enough, Litsch’s “best start” in that span is also the one that most frustrated us. In his April 11th start at Seattle, Litsch battled and got plenty of enthusiastic glove taps for keeping the Mariners off the scoreboard while the Jays’ bats were busy pounding Felix Hernandez to the turn of seven runs. The problem was that it took him 111 pitches to get through five innings, leaving the final 12 outs to the bullpen. The bullpen’s inability to keep the Mariners off the scoreboard in what turned into an 8-7 walkoff loss wasn’t Litsch’s fault. But a meandering, pick-and-nibble approach to each at bat left a lot of work on the table by the time Litsch was hitting the showers. That’s not what you hope for from your starting pitcher.

Looking Forward: In 2009 and 2010, injuries conspired to keep him off the major league roster, while last season, a combination of injuries and a full roster pushed him off the 25-man squad and down to Las Vegas, New Hampshire and Lansing. This year, the pile-up of pitchers might even be worse, so Litsch will be hard-pressed to wedge his way into an airplane seat headed north come the end of March.

Litsch’s best opportunity to stick with the Jays will be as a reliable and efficient reliever who might be able to pitch multiple innings. Otherwise, he’ll be cooling his heels in the Pacific Coast League, waiting for disaster to beset the starting rotation.

2012 Expectations: Litsch has a five pitch repertoire (fastball, slider, cutter, changeup and the occasional curveball), and when healthy, he’s demonstrated decent command of those pitches. We wouldn’t be surprised to see Litsch make the team out of spring training in a relief role, but we wouldn’t count on him sticking around for long. The battle for innings will be fierce this year, and Litsch has yet to show that he’s grasped the skill of good health, so we’d place the over/under on his MLB innings at about 50 this year.

No mention of losing 30lbs and looking, pardon the pun, hungry to secure a roster spot?!? I'll put 1000 bucks on the over. Jesse will surprise us this year.

Wasn't it Cecil who dropped 30 pounds?

i'm a little annoyed that your breakdown fails to mention that Litsch was one of the best pitchers in baseball for a 2 month stretch in 2008. Don't you know this?

Pretty sure it was Cecil who lost weight.

Also, Jesse got married this offseason, which presumably means that he gained 15 pounds if past experience means anything.

shame it was November and December

Wow, it was kind of depressing to realize his debut was that long ago. I remember that game so well too. It seems to me that that was a particularly awful summer to be a Jays fan (though I could be having a Clemensian misremembering episode) and watching that start with my dad was one of the few bright spots of that year. Love the ginger underdog story!

@Deere5400 My dad and I were at that start and it was truly special. Hoping that Jesse sticks around.

Ginger Beard Man is my favourite nickname for him!

A VERY important announcement has to be made at this point - Classical Music Montage Giclee Print Greek gods! Beasts and birds! ... Peace ... Toga parties! ... ... by the Las Vegas ... titled A World in ... was a ... ... of images. Ill tr by catalog and by sessions, very cool!! The Oklahoma City Philharmonic performs from September to May, and features the Discovery Family Concert Series and the Classical and Pops series. Holiday concerts and outreach concerts are also conducted. Through its performances, the OKC Philharmonic, that celebrated its 20th anniversary in 2008, serves to create a positive influence in the community by enhancing its cultural life and encouraging the appreciation for orchestral music, thereby contributing to the community's growth and betterment through cooperation with other agencies of art.