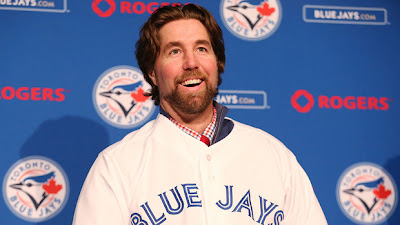 Provenance: Nashville, Tennessee. Attended the University of Tennessee. Drafted by the Texas Rangers with the 18th pick overall in the 1996 amateur draft. Made his MLB debut on April 26, 2001.

Acquired: Traded to the Blue Jays by the New York Mets in exchange for Travis d'Arnaud, Noah Syndergaard, John Buck and Wuilmer Becerra.

Contract Status: Signed a two-year, $25 million contract extension with the Blue Jays for the 2014 and 2015 seasons after his acquisition from the Mets. Contract has a $12 million team option for 2016 with a $1 million buyout. Slated to make $5 million this year to conclude his previous contract.

Back of the Baseball Card: While Dickey has pitched for ten seasons and 1059.1 innings, the only stats that seem pertinent are the last three seasons that he's pitched since gaining some semblance of mastery over the knuckleball: In 94 games (91 starts, 616.2 innings), Dickey compiled a 2.95 ERA with 6.8 strikeouts per nine innings and 2.2 walks per nine. Tossed eight complete games and four shutoutss

Looking Back: At this point, you've probably read the complete biography of R.A. Dickey from every perspective, maybe even including his own best-selling autobiography. There's the troubled childhood, the lack of a ulnar collateral ligament, the Rangers stiffing him on his bonus, the long road to a mediocre career, the last ditch attempt at salvation through the knuckleball, and then success. Also, the humanitarian work, and the renaissance.

If nothing else, R.A. Dickey presents himself as a complex character, containing multitudes, and you can't blame writers for wanting to roll out endless prose on all of the facets of his life and work.

That's not to insinuate that Dickey is merely the creation of a hungry hype machine, because what he accomplished in 2012 was a stunning piece of business. He struck out 24.8% of batters he faced over that campaign, almost 10% more than he whiffed in the previous season, while dropping his walk rate to 5.8%.

In addition to the remarkable levels of success that he had, Dickey was also a workhorse, tossing 233.2 innings over the season, including a league-leading five complete games. He also led the NL in starts (33), batters faced (927), strikeouts (230) and shutouts (3).

Looking Ahead: There really isn't any precedent for a player like Dickey. And while it's true that you could probably say that about every little snowflake that ever landed on a big league field, it's exceedingly difficult to even speculate as to what the future holds for a knuckleballer who throws the pitch as hard and with as many variations as the Jays' putative ace.

In spite of the unique absence of the ligament that trips up most pitchers, there remains a different health concern with Dickey. Thirty-eight years of age is still relatively young for most men, but for an athlete whose game is predicated on maintaining an elusive feel for a specific pitch, the torsion that it takes through the midsection to float a baseball in at 80 MPH without spin is unprecedented.

The other point of concern this season is Dickey's flyball rate, which has continued to rise as he became more effective with the Mets. Dickey's ground ball rate fell to 46.1% last season, while his percentage of line drives and fly balls went up. Moreover, his home run per fly ball rate jumped to 11.3%, and that is with the benefit of playing home games in Citi Field. How many of those balls batted into the air will find leather this season when the welcoming hands of bleacher creatures in Yankee Stadium and Fenway Park are so accommodatingly close by?

Watching R.A. Dickey pitch will be an adjustment for those Jays fans who know him primarily from the piles of bouquets that have been launched at his feet this offseason in the local press. His numbers say he is dominating, but he never quite looks the part, especially when his soft tosses catch a bit too much of the plate and get hammered.

But when the knuckleball is active and darting and dodging its way around bats, there are few pitchers who are more fun to watch.

Pessimistically: Struggles to get the right touch on the trick pitch. The transition into the AL East is tougher than expected, with designated hitters and tiny ballparks making his life difficult.

Optimistically: Gives the Jays over 220 innings of work, preserving the bullpen and befuddling hitters. Begins writing a next chapter that every Jays fan will want to read.
Posted by Tao of Stieb at 9:18 AM

Is there any data available about how often he throws each of his knucklers? Also, the percentages add up to 106%...I'm guessing the four-seam fastball is less than 10%?

Can any connection be made between Dickey and Wakefield? Similar speeds, percentage thrown or secondary pitches? Or is the knuckleball the only commonality?

it will be a long tough year in toronto. watching rasmus flail away at home plate will be frustrating

Hey there! I just wish to give you a huge thumbs up for your excellent info you have right here on this post.
I am coming back to your blog for more soon.
Obat TBC Kelenjar Obat Kista Payudara Herbal Obat Kanker Kulit Alami Obat Syaraf Kejepit Alami Obt Asam Urat Alami