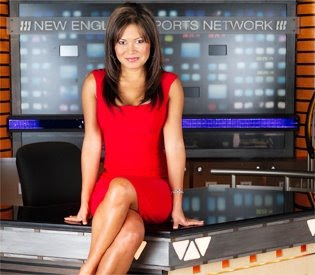 The Globe's Bill Houston reports today that Rogers is well on its way to bringing Hazel Mae's oiled up gams to a TV near you.

Rogers is looking to package some requisite CanCon together with content from the recently launched (and much desired, in these parts) MLB Network to form Baseball TV. (Although we'd put money down that the name becomes MLB Network Canada by the time the channel launches.)

Before anyone starts bitching and moaning about the fact that we're not getting the original purely American feed, we'd note that the lattitude that Rogers has in their licence may actually make the Canadian version a better choice. Baseball TV is currently licenced to air 10% live baseball games, which would work out to about five live games per week. (MLB Network currently offers live look ins, like the Score's old Diamond Surfing feature.)

The Canadian content on the channel may actually be a boon to Jays (and Expos) fans if they include classic games from the Canadian franchises. Classic baseball is rarely seen on CTVglobemedia's ESPN Classic Canada (apparently, they can't squeeze it in between Classic Darts and Classic Pub Night).

We firmly believe that there is an appetite for more classic Jays games beyond the handful that we've seen repeatedly (World Series clinchers and what not.) For instance, we'd love to see the Jays' 1991 ALCS games versus the Twins again.

Houston concludes by repeating the speculation that the channel could launch in Canada in the spring, in time for the start of the season. While we would love to see some baseball over the winter to warm our hearts as we shovel out and trudge through snowbanks, it's probably better late than never.

UPDATE: If you want a sense of what the MLB Network has to offer, check out the panel discussion on the Jays homepage featuring Joe Magrane, Harold Reynolds and Al (Blisters on my Blisters!) Leiter. We don't even care if we don't agree with them...it's just nice to hear guys talking baseball.

The Yankees have big bags of money, the Red Sox have big brains
We begrudgingly tip our cap to the Red Sox brain trust, who appear to be close to signing Rocco Baldelli (sorry GROF boys) and John Smoltz. There are all sorts of health risks with both of those players, but if they are healthy, they fit perfectly into the Sox 25-man roster.

To be honest, those signings (if they come to pass) would worry us more than the Yankees' spree and the Rays' signing of Pat Burrell.
Posted by Tao of Stieb at 10:10 AM

Hey Tao, any thoughts on the idea that Rogers might want to sell the Jays sometime in the future now that Ted is installing a big wireless network in the sky?

Either way, we doubt that anything will happen before or during the 2009 season.

I wish Mark Cuban would buy the Jays.

I gotta say I enjoyed that MLBTV baseball talk. They were actually talking about the Jays like they had seen them play last year, a rarity for American TV guys.

Darren I might have called you crazy a few years ago BUT now? Good call on that, mate. Tao nice job on the Yankee's money vs Red Sox brains! I live in NY so I get MLB and it was cool to see Magrane(who called for Tampa) and Leiter(who called for the Yankees) actually pay attention.

The Yankees, Rays, and Red Sox all made moves...even the Os are gonna make major league signings. The MLB guys were too kind to the Jays, Harold Reynolds naysayed all this crappy 2010 talk in a great way. JP did a crappy interview right before they had that discussion and he was terrible. Reynolds pointed out that Johnny Mac should be playing short, sort of pointing out JP's/ Cito's stupidity of having 3 shortstops AND playing Scoot as the number 1! They will end up at least in 4th without any changes. Wilner claims they will win 83-88 wins, where on an alternate universe? They lost 18 wins from AJ, over 10 from McGowan and Marcum, so they might win 70 if they are lucky. Purcey is good, but not great. Richmond is not bad either and Cecil won't be ready until the middle of the season. They look like a mess and they didn't sign a DH like Burrell or a Giambi. It's really a joke. Darren is right bring Cuban,on!
Bruno Von Rottweiler

If Burnett and Marcum's replacements are replacement level (5.5 ERA) that's 70 runs worse than Burnett and Marcum themselves. Repeating the 4.7rpg of the identical offense from the last half of 2008 would add 40 runs, and 10 more is an extremely conservative estimate for the return of Aaron Hill and more than a third of a year of Snider. That would put the Jays at 90 wins. If one of the replacement pitchers is instead a league average 4.5ERA, that's 92 wins. That doesn't even take into account that Litsch, Purcey, Lind, and Snider are young players who might, you know, improve? And it assumes that McGowan will miss 3 months like he did last year, when May is widely cited as the timetable for his return.

Thanks, Bruno. I'd love to have an owner that wanted to win as bad as the Steinbrenners, but I also have to agree with the numbers in the above post. It's not like the Jays are just going to concede the 30 games Burnett started last year. I honestly don't think we will be missing Burnett, but ya never know. That's why we play the games.

I just wish the Jays were doing more to generate excitement. I wish there was some way to quantify the financial impact of signing someone like Manny. Seems to me he would generate tons of buzz, more ticket receipts, better ratings, more, more, more and basically pay for himself.

But I am not a smart man, Jenny.

They assembled a seemingly indestructible offensive powerhouse in the offseason, and they proceeded to win 14 fewer games and finish a game behind the Royals.

The amazing thing is the Marlins has a better record after "unloading" Cabrera. I guess you just never know.

So we'll put Tao in the "don't sign Manny" pile.

Fuck that: we're firmly in the "sign Manny" camp.

It's just that we're not going to pitch ourselves off a bridge if he happens not to sign with the Jays.

Well, no. I have other, better reasons to pitch myself off a bridge -- not that there's a bridge around here that would result in death.

I just desperately want a Todd MacFarlane plastic sculpture of Manny in a Jays uni. Oh God, I want that so much.

Darren, I think Manny would bring fannies to the seats no doubt! His impact would be huge. It's a no brainer .

Torgen, I hate projections because they always seem lik a possibilty rather than a reality. The offense might be a bit better this year, BUT Purcey, Romero, Janssen and whomever else in the rotation are largely unproven. who knows what purcey will become. I mean the Jays' number 5 pitcher will be their number 2 pitcher, that doesn't cause concern at all? Also, the Rays, Yankees and Red Sox will still be good no matter what. They have all added some Major League talent and the Jays have added minor league dreck if anything.

Its great to see some actual baseball talk.

The Jays have major pitching depth, unlike the Yankees or Rays, and are about par with Boston:

Where we need improvement is in the hitting department, and hopefully Wells, Hill and Rios can put it together with Snider and Lind.

Andy MC, Clement and Maroth are on a pitching depth scale? Andy, C'Mon! Look at the Rays, top five starters, Price is their 5th starter. The Jays fifth starter is who? Richmond, Janssen or a cast of musical chairs. My prediction: 60-70 wins!

Cecil was just as good as Price in the minors in 2008, and neither's going to pitch more than 140 innings if their respective teams know what's good for them.

plus, Cecil is a full year younger. So tell me, why doesn't Cecil receive anywhere near the hype? is it because he didn't go #1 overall? Now, I'm not saying Cecil's stuff is as good as Price's....but shouldn't we all maybe be a bit more excited about this kid?

Oh, you're counting minor league career, not 2008 only like I was.

And anyways Anonymous, even if Price is some golden god who throws a no hitter against us every time we face him, that can only be 6 times a season. Subtracting 6 wins from my low end projection (where we fill the back of the rotation with replacement level pitchers) still has us at 84 wins. Where do the other 14-24 go?

The Yankees added CC and AJ, no? AJ will try to look good in his first year, so say what you want they have those two guys. The thing with Price is that he has done it in the biggest stage in baseball:the playoffs. we don't even know if Cecil can even hack it in the majors yet, let alone Purcey. The Rays will smack around the Jays in an even worse sense this year, no? Then Blatimore gets better this year, God knows how that Japanese guy will pitch. Kinda ironic that the Jays are the only team without a Japanese player,unh?

You don't think AJ tried to look good in his first year here? And he went on the DL. If you're judging Price by being a bullpen pitcher in the playoffs, I guess all the small sample size alerts in the world won't dissuade you. And Uehara was hardly Halladay-eqsue in a much weaker japanese league.

1) Baseball TV is fine for what it is, but I'm still steamed by the fact that mlb.tv is not available for purchase to Jays fans (all of Canada is considered the Jay's home market).

2) Classic game...July 1st (year??) Jeff Juden of the Expos vs. Roger Clemens. It finished 1-0 and both pitchers carried no or 1-hit ball deep into the game.